Home » Publications » Fiscal trends and policy issues and implications for the Caribbean
Available in: English

Fiscal trends and policy issues and implications for the Caribbean 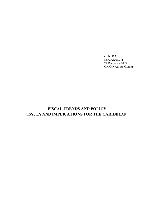 This document analyses fiscal trends and policies for Caribbean countries. It is divided into six parts. Following the introduction, the second section focuses on trends in government revenue and examines the tax structure at the regional and country level. The third section describes the type of tax incentives granted by Caribbean
governments for sectoral development for selected country cases. The fourth part centres on government expenditure; describes the decomposition of government expenditure and analyses the behaviour of the components of government expenditure. The fifth section deals with the fiscal result; presents an analysis of the fiscal stance and relates fiscal policy to the external constraint. In particular, it argues that a purely fiscal stabilisation policy is a misguided policy and that in fact any attempt at fiscal reform must also address simultaneously the issue of export competitiveness. The final reflections are found in the conclusion.

Issues, effects and implications of the Free...
Shaping the future of social protection: access,...
Economic Survey of Latin America and the...
A decade of social development in Latin America,...