Home » Publications » The Netherlands Antilles: trade and integration with CARICOM
Available in: English

The Netherlands Antilles: trade and integration with CARICOM 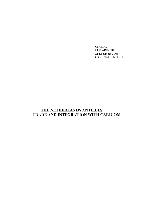 Introduction The Netherlands Antilles is an autonomous entity within the Kingdom of the Netherlands and comprises a federation of five Caribbean islands: Bonaire and Curacao (the Leeward islands) which comprise 80 per cent of the population of 211,000 and Saba, St. Eustatius and the southern part of St. Maarten (the Windward islands). Like the other countries in the Kingdom, it enjoys full autonomy in internal matters as, for example, education, public health, justice and customs. It has a per capita income of about US$ 12,000. The Leeward Islands and the Windward Islands account for about 75 per cent (Curacao (70 per cent) and Bonaire (5 per cent)) and 25 percent respectively of the economy of the Netherlands Antilles. The Netherlands Antilles has its own currency, the Netherlands guilder, which is pegged to the United States dollar at a fixed rate since 1971. The economy has some unique features that stem from its close relations with the Netherlands, its undiversified nature and heavy dependence on tourism, offshore finance, oil refining and shipping, the high share of trade (exports of goods and services of about 75 per cent of GDP), its geographical characteristics, its common border with the French Republic on St. Maarten, its duty-free access for imports from Aruba, its de facto free trade zone (FTZ), partial dollarization, especially for the Windward Islands, and its highly regulated labor market (1). Adverse economic shocks in the last two decades affected particularly the offshore financial sector and the oil refinery and, to a lesser extent, tourism. The repeal of withholding taxes in the United States in the 1980s indirectly caused the collapse of a number of highly profitable offshore financial activities in Curacao, leading to significant drops in government revenue and contributions to foreign exchange earnings. The withdrawal of Shell from Curacao in 1986 and the (temporary) closure of the oil refinery which had been a mainstay of the Curacao economy for almost three quarters of a century was the second major shock. It was subsequently leased to the Venezuelan State Company, Petroleos de Venezuela Sociedad Anonima (PDVSA), which resumed operations and preserved employment. In the 1990s, the Windward Islands were bit by several devastating hurricanes, which destroyed much of the economic infrastructure on the islands, including about half of the number of available hotel rooms in St Maarten. Further negative shocks were related to the discontinuation of certain trade privileges on European markets for Overseas Countries and Territories (OCTs), the withdrawal by the Netherlands of certain tax privileges for Dutch pensioners residing in the Netherlands Antilles and disruptions in the availability of Solidarity Fund resources for the smaller islands. National income has been on the decline since 1997. GDP declined by about 6 per cent between 1997 and 1999. Underlying fiscal imbalances and structural weaknesses have also impacted negatively on the economy. In recent years, with recession high unemployment and migration have been experienced (2). The Netherlands Antilles has been able to survive thanks to additional aid from the Netherlands, large-scale spontaneous emigration (mostly to the Netherlands), some drop in international reserves, an increase in domestic debt and arrears and reduced outlays for the maintenance of public assets. From 1986 onwards, successive efforts at restoring macroeconomic balance, particularly with regard to public finance, were made, but were unsuccessful. Adjustment was also attempted in 1996 and 1997, but failed to meet the desired targets. In 1999, the government launched a new National Recovery Plan" (NRP). The NRP contains important medium-term structural adjustment measures aimed at restoring macroeconomic balance and conditions for revitalizing the economy. The NRP subsequently served as an important input into a comprehensive adjustment plan drawn up with the assistance of the International Monetary Fund (IMF) and reflected in the government's Memorandum of Economic Policies dated 15 September 2000. Beyond restoring macroeconomic balance and reforming the economic incentive framework, the government aims at establishing a Comprehensive Development Framework (CDF) for the formulation and implementation of a sustainable long-term growth strategy. It is against the above background that this study is undertaken. Its main objective is to assess the integration options facing the Netherlands Antilles (3) vis-a-vis the Caribbean Community (CARICOM). A secondary objective is to examine the above taking into account, inter alia, the level of trade between the Netherlands Antilles and CARICOM, the barriers to trade between the two groups of countries and the requirements for increasing trade between the two groups of countries. The Consultant was given an initial Draft Terms of Reference (Annex 1) with the intention of modifying it in the course of the interviews with all the stakeholders. The main idea that emerged from these interviews was a concern with some possible form of association with CARICOM. The Consultant was asked to exam the costs and benefits of various forms of association and to recommend an option. This adjustment of the Terms of Reference (TOR) was substantial and involved the Consultant having to do some interviews and collect documentation in CARICOM. The study essentially revolves around the search for a road map for the Netherlands Antilles. It is tackled in the first instance by describing the existing system of trade of the Netherlands Antilles with a view to determining the import and export structures and the specific nature and extent of trade in goods and services between the Netherlands Antilles and CARICOM. 1 Netherlands Antilles: Elements of a Strategy for Economic Recovery and Sustainable Growth. Interim Report of the World Bank Mission, 5-20 December 2000. 2 IMF, IMF Country Report No. 01/73 Kingdom of the Netherlands-Netherlands Antilles-Recent Development, Selected Issues and Statistical Appendix. May 2001 3 The Netherlands Antilles is a country within the Kingdom of the Netherlands. It contains five islands. Curacao and Bonaire (Leewards) and St Eustatius, Saba and St Maarten (The Windwards)"