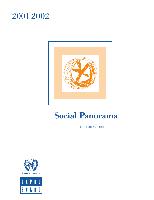 The year 1997 marked the end of a cycle of growth in Latin America that enabled a number of countries to make significant strides in reducing poverty. The turning point in this process was the Asian crisis, which ushered in a five-year stretch of slower economic growth,higher unemployment and unchanging (or, in many cases, rising) poverty indices in the region. It may be said, without exaggeration, that the people of Latin America have once again been frustrated and discouraged by the adverse consequences of this lost half-decade. This edition of the Social Panorama presents the argument, however, that Latin America and the Caribbean as a whole, and especially the countries with higher per capita income levels, are nevertheless in a position to formulate and implement economic and social policies which, once growth has resumed, will enable them to achieve, by 2015, the poverty reduction target laid down in the Declaration adopted at the United Nations Millennium Summit.1 Latin America can and should make every effort to achieve sustained growth and devote more resources to more ambitious and higher-quality social policies and programmes to meet the goal of halving poverty by the target date and eradicating the most serious forms of extreme poverty. The Social Panorama emphasizes that, to reach this goal, along with the other development goals set out in the Millennium Declaration, education coverage must be rapidly expanded and education quality must be substantially improved to narrow the gaps between children and young people from different socio-economic groups. It also highlights the importance of making education more relevant by adapting it to the demands of economies that are increasingly technology-intensive and active in world trade. The high drop-out rates in Latin America's schools, which are analysed in this edition of the Social Panorama, point to the urgency of retaining pupils in primary school and considerably increasing the retention rate in secondary school if the United Nations goals for 2015 are to be met. In addition, the finding that much of the region's human capital has gone untapped highlights the need to take a closer look at both economic growth patterns and the quality of higher education and technical training systems.