Home » Publications » Latin America and the Caribbean in the World Economy 2008-2009: Crisis and opportunities for regional cooperation
Available in: EnglishEspañol

Latin America and the Caribbean in the World Economy 2008-2009: Crisis and opportunities for regional cooperation 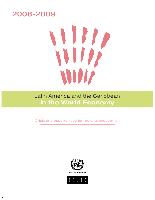 The 2008-2009 edition of Latin America and the Caribbean in the World Economy is divided into three chapters. Chapter I offers a medium-term view of the current international economic conditions, examining in particular the variables that are most likely to shift global scenarios and affect the position of the Latin America and Caribbean economies in the world economy. The crisis has triggered or accentuated trends such as the growing significance of the emerging economies (with the resulting impact on the region's trade flows), and the differentiated patterns of world trade in manufactures, commodities and services. Chapter I also reviews the debates currently taking place in international forums on climate change and trade, and the various forms of protectionism that have arisen as a result of the crisis. Chapter II looks at the immediate and long-term implications of the current crisis for regional trade patterns, in terms of origins, destinations and the sectoral composition of trade flows. It also analyses the behaviour of commodity prices, terms of trade, international trade in services, tourism, foreign direct investment (FDI) and remittances. Lastly, the region's trade policy responses to the crisis are discussed. Chapter III examines opportunities for regional cooperation in Latin America and the Caribbean. The new international conditions call for greater cooperation among the countries of the region, not only to contain the fallout from this crisis, but also to improve the region's position in the global economy. With this in mind, seven areas of cooperation are proposed: infrastructure, trade facilitation, innovation, reduction of asymmetries, social cohesion, climate change and closer ties with Asia-Pacific. These are all determinants of the region's competitiveness, innovation and productivity in the medium and long terms. In this regard, the consequences of losing the global competitiveness race would be much worse than the effects of the current crisis which, painful as they may be, will be temporary. Conversely, lags in competitiveness, innovation and productivity represent a permanent obstacle to the implementation of growth-with-equity strategies.