Latin America and the Caribbean in the World Economy 2006: 2007 trends 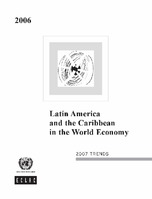 Latin America and the Caribbean in the World Economy 2006: 2007 trends

This year’s edition of Latin America and the Caribbean
in the World Economy is divided into six chapters.
Chapter I contains an analysis of recent trends in
the economies of the United States, the European
Union and Japan as well as a number of emerging
Asian economies. The determinants of the imbalances
existing among these economies are examined, and the
role of these disequilibria as the principal risk factor in
what nonetheless remains a positive global environment
is considered. Factors influencing the trade performance
of Latin America and the Caribbean are discussed, as
are the region’s trade results and outlook in 2006 and
2007. The chapter concludes with an analysis of the
difficult negotiation process being pursued in the
Doha Round and how it has been affected by changes
in United States trade policy.
Chapter II offers an overview of the world
economy’s recent restructuring around the Asia–Pacific
region, especially China, and the regional integration
process that has been taking place in the wake of the
Asian crisis. This region has become not only the
world’s most dynamic market, but also a major source
of financing which is paving the way for the achievement
of international financial equilibrium. This analysis
shows that, in practice, the deepening of the regional
integration process revolves around China, which is
playing an increasingly central role as an extraregional
export platform for its neighbours.
In chapter III, the strategic role of business services
and the main trends to be observed in this sector are
explored, and comparisons are drawn between the
Latin American and Caribbean region and selected
Asian countries. The success achieved by some Latin
American firms in this niche is examined, together
with the factors underlying their export performance,
such as the regulatory framework, human capital
endowments and the adaptation of advanced technology.
Consideration is also given to the liberalization of
trade in services under the various trade agreements in
force in the region.
Chapter IV looks at the current status of regional
integration efforts and of bilateral and plurilateral
negotiations with countries outside the region that are
having an impact on the progress made in this area. An
overview is provided of milestone events in the
integration processes of the various subregions
(MERCOSUR), the Andean Community, the Central
American Common Market (CACM), the Caribbean
Community (CARICOM) and the South American
Community of Nations) as they seek out complementarities
and opportunities for the convergence of
trade rules.
The Asia–Pacific region’s integration process,
which until recently consisted primarily of a de facto
form of integration in the sphere of production, is
examined in Chapter V. This process is now being
complemented by de jure integration under the terms
of both intraregional and extraregional trade agreements.
In the light of these trends, the Latin American and
Caribbean region should work to strengthen its trade
and investment links with Asia and the Pacific, heighten
its production complementarities with that region and promote business and investment alliances that will
provide it with broader access to those markets and
help it position itself within Asian production and
export chains. Trade agreements that move the region
in this direction can serve as valuable tools for the
application of such a strategy.
Chapter VI explores the various ways in which
export development and innovation are linked and how
these links are reflected in institutional strategies and
institution–building. The cases of Australia, Finland,
Ireland, Malaysia, New Zealand, the Republic of
Korea, Singapore and Sweden —countries that attach
importance to innovation and are better–placed
than others to compete in the global economy— are
studied within this framework. On the basis of
this comparative analysis, a number of policy
recommendations are formulated.