Latin America and the Caribbean in the World Economy 2005-2006 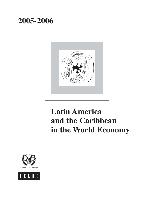 Latin America and the Caribbean in the World Economy 2005-2006

The 2005-2006 edition of Latin America and the Caribbean
in the World Economy is divided into six chapters.
The first chapter analyses recent trends in the
international economy and trade, capital flows and
the region’s trade performance. The causes of external
imbalances are examined, along with the behaviour of the
economies of the United States, Japan and the European
Union, oil prices, interest rates and exchange rates. It
also presents Latin American trade projections for 2006
and 2007, as well as looking at the main risk factors that
could undermine the favourable conditions now existing
in the region.
The second provides an overview of recent economic
developments in China and India and examines these
countries’ trade relations with Latin America and the
Caribbean. Trade relations between these two Asian
nations and the Latin American and Caribbean region
have recently been flourishing thanks, in particular, to the
prospects for securing access to South America’s natural
resources. Nonetheless, these two countries have yet to
take full advantage of the Latin American and Caribbean
region’s potential as a supplier and buyer.
The main issues raised by the Doha Round of trade
negotiations following the Ministerial Conference held in
the Hong Kong Special Administrative Region (SAR) of
China are explored in chapter III. The participants in the
Hong Kong Conference changed the direction of these
talks and agreed to proceed on an “aid for trade” platform,
but they failed to alter the political climate for decisionmaking
sufficiently to permit the main stakeholders to
reach agreement on a package of measures in the first half
of 2006. In order for this to have happened, three of the
major parties to these negotiations would have had to meet
very specific demands: the European Union would have
had to agree to lower its agricultural tariffs; the United
States would have had to make greater commitments to
cut agricultural subsidies; and the Group of 20 (G-20)
would have had to reduce industrial tariffs and undertake
certain commitments on trade in services. The chapter
concludes with an analysis of the uncertain future of this
recently suspended round of trade talks.
The fourth chapter assesses the current status of
regional integration efforts and calls for the revitalization
of the various initiatives being pursued in this area, not
only in order to help form closer trade relations within
the region, but also as a means of capitalizing upon the
potential benefits of new trade agreements reached by
Latin American and Caribbean countries and blocs with
trading partners in other parts of the world. To this end,
consideration is given to a variety of approaches for bringing
about convergence among the trade rules governing the
many different free trade agreements (including subregional
integration accords) in effect in the region.
Chapter V looks at how Latin America’s competitiveness
indicators measure up against those of a set of OECD
countries that are major natural-resource exporters. The competitiveness and innovation strategy used by Australia
and New Zealand (which have export structures similar to
those of some South American countries) is then examined
as an example of a successful effort to use competitiveness
and technological innovation to position these countries
advantageously in the international economy.
The main economic losses associated with bird flu
and foot-and-mouth disease are discussed in chapter VI.
The chapter reviews a number of specialized studies on
the economic and social costs of recent outbreaks of
these two transboundary animal diseases, which pose a
formidable challenge for world trade in beef and poultry
meat. Consideration is also given to how they have
affected the trade flows of the main exporters of these
products, and regional policy proposals for dealing with
their implications are offered.