Latin America and the Caribbean in the World Economy 2004: 2005 trends 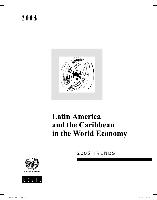 Latin America and the Caribbean in the World Economy 2004: 2005 trends

The 2004 edition of Latin America and the Caribbean in the World Economy, which reviews the past year and looks at trends in 2005, is divided into six chapters. Chapter I examines recent developments in the world economy, particularly the major changes occurring in the structure of international trade and financial flows and their implications for the Latin American and Caribbean countries. Chapter II analyses the international negotiations taking place within the framework of the World Trade Organization (WTO). These multilateral negotiations have yet to result in the anticipated convergence, although the participants have shaken off the discouragement that came with the frustrated expectations of Doha and the failure of Cancún, when the original 2005 deadline for the talks' conclusion was pushed back. The chapter gives an account of the negotiations on the main topics under consideration. It also assesses the potential for the success of this process, in which the countries of the region have maintained an increasingly active presence as exemplified by Brazil's leading role in the establishment of the Group of Twenty (G-20). Chapter III looks at the status of regional integration efforts at this critical juncture, as a number of the region's countries become more actively engaged in North-South negotiations with the United States and the European Union. This situation underscores the need to harmonize the trade agenda's different levels and highlights the classic challenges of subregional integration, i.e., how to go about strengthening the institutional structure for integration, harmonizing disciplines, ensuring macroeconomic coordination and dealing with asymmetries. Chapter IV discusses protectionist trends in the world economy and especially in developed countries. The analysis covers the pressures being exerted on China's textiles sector, the main agricultural issues and the favourable rulings secured by some developing countries through the Dispute Settlement Body of WTO. Chapter V considers the strategic aspects of economic and trade relations between China and Latin America and the Caribbean, particularly South America. China has become a major actor in world markets for goods, services and capital and is becoming a valuable strategic ally for the Latin American and Caribbean countries in trade-related matters and negotiations. This chapter reviews the formidable network of trade and investment agreements that has grown up between South America and China, which is engendering expectations of a new type of relationship between the two. Chapter VI provides a Latin American and Caribbean perspective on the complex links that have developed among trade, security and transport as security measures are tightened in the wake of terrorist attacks in the United States and Europe.