Home » Publications » Foreign Investment in Latin America and the Caribbean 2000
Available in: EnglishEspañol

Foreign Investment in Latin America and the Caribbean 2000 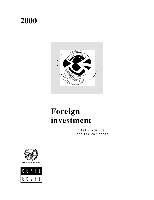 This study seeks to provide greater insight into foreign direct investment (FDI) in Latin America and the Caribbean. A corporate strategy-based analytical framework has been used to interpret the copious yet heterogeneous information available on the subject. The research programme employed by the Unit on Investment and Corporate Strategies is structured around the examination of specific situations in selected investor countries, FDI host countries and FDI recipient industries in the region. This research, together with the statistical and qualitative data compiled by the Unit's Information Centre, has been used to provide an increasingly comprehensive picture of FDI in the region. In 2000, for the first time in nearly two decades, the Latin American and Caribbean region's FDI inflows dropped by 20% from the previous year's figure to stand at just US$ 74.191 billion. Nevertheless, caution should be exercised in analysing this turnaround in the trend, since the large inflows recorded for 1999 were the result of a limited number of major acquisitions of Latin American companies by foreign corporations which are unlikely to be repeated in the future. In addition, close to 60% of total foreign capital inflows were concentrated in just two countries: Brazil and Mexico. In fact, Brazil was the top choice of foreign investors for the fifth year running and accounted for 40% of total FDI inflows to the entire region. Moreover, in a continuation of the trend of earlier years, a very high percentage of FDI flows were used for the acquisition of existing assets, primarily in services sectors such as telecommunications, energy and finance. In addition to giving a broad-ranging and detailed review of FDI in Latin America and the Caribbean, this report presents a thorough analysis of Chile's position as a destination country (particularly in natural resource-based activities and, more recently, services); of Japan's role as a major international investor, but one which has few interests in the region; and of the telecommunications industry, one of the sectors that best reflects the astonishingly rapid changes associated with globalization. Each of these elements contributes to an increasingly thorough grasp of the nature and impact of FDI in the region as well as a fuller understanding of the phenomenon itself. Download presentations by chapters