Home » Publications » Foreign Investment in Latin America and the Caribbean 2006
Available in: EnglishEspañol

Foreign Investment in Latin America and the Caribbean 2006 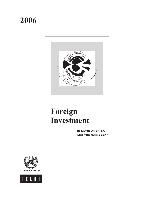 In 2006, foreign direct investment (FDI) inflows to Latin America and the Caribbean (excluding the main financial centres) continued their upward trend, reaching over US$ 72 billion, for an increase of 1.5% over 2005. At the same, however, the region's share of global FDI inflows declined, as flows increased more rapidly in other parts of the world. The situation with respect to FDI outflows in 2006 was quite different, as outward FDI (OFDI) from Latin American and Caribbean countries jumped by 115% to about US$ 41 billion, expanding faster than in the rest of the world. The main message of this year's report is that active and integrated FDI attraction policies linked to national development strategies are necessary to secure quality FDI. These are lessons drawn from policy practices in the more successful European and Asian countries, which contrast with the more passive and disconnected FDI attraction policies evident in Latin America and the Caribbean. The 2006 report also contains chapters that analyse the experiences of two relatively small investor countries in Latin America and the Caribbean: the Republic of Korea and Portugal. In the first case, it was found that one of the reasons why the region plays a fairly minor role as a destination for OFDI from the Republic of Korea is that its FDI attraction policies have not been effective in attracting and upgrading dynamic FDI in the electronics, automotive and apparel sectors. In the second case, passive policies proved sufficient to attract significant FDI in services from Portugal to Brazil, but only for a limited period of time.