Foreign Investment in Latin America and the Caribbean 2005 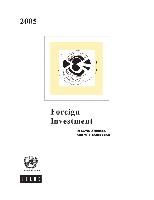 Foreign Investment in Latin America and the Caribbean 2005

Abstract In 2005, foreign direct investment inflows to Latin America and the Caribbean (not including financial centres) amounted to over US$ 68 billion, almost 11% more than in 2004. These inflows greatly exceed the figures recorded between 2001 and 2003, but they still fall short of the volumes observed during the FDI boom of the late 1990s. The region also continues to see its share in world flows decline, which suggests that it has yet to realize its true potential for attracting such investment. This is at least a two-fold problem. On the one hand, the region has certain policy-related and institutional weaknesses that hinder its efforts to face up to the strong competition for FDI. To gain a better understanding of this situation, the Economic Commission for Latin America and the Caribbean (ECLAC) carried out a study on the role and practices of 15 investment promotion agencies. The findings of that study are presented in chapter II. On the other hand, success in taking advantage of FDI and the presence of transnational corporations depends, to a large extent, on the extent of local companies' absorptive capacity. The second part of this year's report provides a detailed analysis of the competitive positions and internationalization processes of a large number of emerging Latin American transnational corporations, referred to in the study as trans-Latins. This information was compiled on the basis of interviews with executives from major trans-Latins in Argentina, Brazil, Chile and Mexico. The conclusions reached on the basis of this analysis are presented in chapters III through VI. Link to the presentation of ECLAC Executive Secretary, José Luis Machinea""