Home » Publications » Foreign Investment in Latin America and the Caribbean 2004
Available in: EnglishEspañol

Foreign Investment in Latin America and the Caribbean 2004 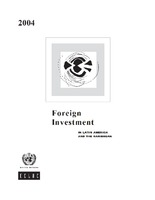 For the first time since 1999, foreign direct investment (FDI) inflows into Latin America and the Caribbean grew in 2004. These inflows topped US$ 54 billion, far exceeding the US$ 37 billion registered in 2003 and representing a 46% increase. This is welcome news for the region, as it may portend the beginning of a new and sustained investment boom. However, it does not mean that the Latin American and Caribbean countries have solved their problems with regard to the limited benefits they receive from the presence of transnational corporations (TNCs) within their borders. In general, existing FDI inflows are not of the quality that is required. If the region's countries are to increase the benefits they reap from the presence of TNCs, the national policies and institutions they have put in place to deal with international commitments regarding investment, establish incentives to attract FDI and evaluate the results of FDI policies will need to be improved. This year's report focuses on market-seeking investment strategies of TNCs in the region. The second chapter deals with the experience of Brazil, which is a major FDI recipient that mainly attracts this kind of FDI and has begun to demonstrate an interest in attracting other kinds, especially the efficiency-seeking variety that generates exports. The third chapter looks at the experience of the electricity sector in the Southern Cone. This sector was characterized by market-seeking investment during the boom of the 1990s, but that investment failed to redress existing capacity shortages and the industry went into crisis. This chapter suggests that a subregional approach to this sector's development might help to attract FDI from new stakeholders, such as petroleum companies, through the integration of gas and electricity activities.

Internacionalización y estrategias empresariales...
Foreign Investment in Latin America and the...
Toward an integrated transport policy:...
Transport facilitation from the perspective of...