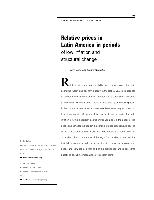 Relative prices and price stability have a recognized identity in
economic theory and economic policy. In the last 50 years it is possible
to configure numerous scenarios, according to the relative importance
given by Latin American governments to price stability and relative prices.
In the current debate, relative prices have been receiving less attention
than price stability. Underlying this appears to be the belief that, with
inflation low, the dispersion coefficient for variations in the prices of the
goods and services included in the consumer price index should decline
as well. The present article, in addition to describing the recent evolution
of relative prices in a number of the region's countries, shows that this
belief does not accord with the facts, identifies homogeneous groups of
goods and services at either end of the distribution and raises some
questions about the implications of this last finding.