Current conditions and outlook: Economic Survey of Latin America and the Caribbean 2002 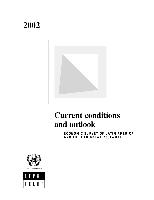 Current conditions and outlook: Economic Survey of Latin America and the Caribbean 2002

Foreword This publication provides an assessment of the region's economic performance and economic trends during the first half of 2002 and of its prospects for the remainder of the year within the context of the previous year's performance. An analysis is presented of the main aspects of the regional economy -its external sector, levels of economic activity, inflation, employment, saving and investment, and macroeconomic policy-, accompanied by a statistical appendix containing 13 tables with data series through 2001. The document, which is being published simultaneously in Spanish and English, corresponds to the first chapter of the Economic Survey of Latin America and the Caribbean, 2001-2002, issued in Spanish in September and in English later in the year. Wide distribution of this document is intended to serve the purpose previously performed by the Economic Panorama of Latin America, a publication that was issued in September of each year between 1985 and 1996. See also an advance version of the survey of economic developments in English-speaking countries of the Caribbean in 2001 and their prospects in 2002 which will be contained in final, revised form in the Economic Survey 2001-2002.