Home » Publications » Economic survey of Latin America and the Caribbean 2012: policies for an adverse international economy
Available in: EnglishEspañolPortuguês

Economic survey of Latin America and the Caribbean 2012: policies for an adverse international economy 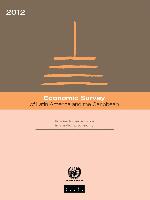 The sixty-fourth edition of the Economic Survey is divided into four chapters. The first chapter reviews the economic performance of Latin America and the Caribbean during the first half of 2012, against the backdrop of a global economic slowdown and heightened uncertainty as to prospects for growth in the major economies. This scenario contributed to a slight cooling of economic expansion in Latin America and the Caribbean as a whole, especially through the trade channel. Demand continued to edge up, thanks primarily to household consumption, while rising investment or the positive contribution of net exports helped sustain brisk economic growth in a number of countries. This chapter also examines how macroeconomic policies were tailored to this unfavourable environment and sought to broaden the space for facing an external context that could turn even more negative. The second chapter assesses the economic policies implemented by the countries of the region in the face of three adverse external scenarios: spiralling food and fuel prices in 2008; the global financial crisis (the worst of which ran from September 2008 to late 2009); and international uncertainty and the global economic cooldown starting in the second half of 2011. This chapter shows how the region has developed the capacity to respond to the challenges that such conditions pose, although the policy space differs substantially from one country to another. One of the key factors for achieving high, sustainable growth and reducing vulnerability to an adverse external environment is investment. The third chapter tracks investment in the region over time, identifying its components and examining the pattern of savings for funding investment. Recent adverse events have highlighted the need to develop appropriate national policies for dealing with them, as well as the importance of strengthening response capacity at the regional level. The fourth chapter examines the challenges faced and the progress made on four important fronts: the countercyclical response on the part of the regional development banks; new instruments for facilitating intraregional trade; changes to the Latin American Reserve Fund; and the creation or strengthening of mechanisms for fiscal and monetary authorities to cooperate in exchanging information and drafting common standards.