Home » Publications » Why is there so much economic insecurity in Latin America?
Available in: English

Why is there so much economic insecurity in Latin America? 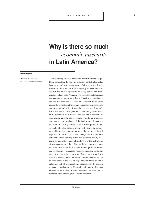 The view that pervasive economic insecurity threatens political support for the ongoing market-oriented reforms has become one of the most common refrains in current discussions on Latin American affairs. Dealing with economic insecurity would thus appear to be a key part of the unfinished agenda of Latin America's reforms. The author argues that economic insecurity in Latin America is multifaceted and has many sources that feed on each other. Some of the insecurity arises from the decline in employment protection and increased volatility of household outcomes. Some of it is the result of erratic capital flows and the systemic instability generated by a divorce between the instruments of stabilization and the real economy. Finally, an important component is the weakness of the institutions of voice and representation. Programmes aimed at social protection per se can be of partial help only. They will have to be complemented by applying macroeconomic policies, especially with regard to capital flows and the exchange rate, that are more conducive to the stability of the real economy and by loosening the control of financial markets over the instruments of macroeconomic policy. They will also require access to representative institutions -trade unions, political parties, and legislatures- with greater responsiveness and legitimacy than those that exist at present. But perhaps what Latin America needs most is a vision of how social cohesion can be maintained in the face of large inequalities and volatile outcomes, both of which are being aggravated by the growing reliance on market forces. The region will have to develop a vision that finds a way to ease the tension between market forces and the yearning for economic security.