Social stratification under tension in a globalized era 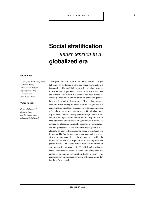 Social stratification under tension in a globalized era

The objective of this paper is to explore the effects of globalization on the labour market and social stratification. It is generally held that globalization will bring about progress for nations and people. This, however, is far from clear, since the experience of almost two decades has been raising increasing doubts about the potential net gains and, particularly, the distribution of such gains. Clearly, there are winners and losers among both countries and people. We will concentrate on the effects upon people within countries and refer only to one region: Latin America. Our aim is to identify winners and losers in the globalization process and, particularly, the impact on social stratification. Is globalization leading towards greater social integration within nations, or is social disintegration the result (because only some groups are being integrated, while a majority is progressively excluded);? To analyse this issue, the paper is structured into four parts. The first looks at globalization as an integral part of a policy compact, since it is necessary to consider the impact of the whole package rather than trying to isolate partial effects. The second concentrates on the effects on employment, incomes and equity. The third explores changes in the social structure associated with some of the main processes accompanying globalization. Lastly, we draw some conclusions about the social structure of Latin America during the reform period.