Home » Publications » The tax regime for micro-enterprises in Cuba
Available in: English

The tax regime for micro-enterprises in Cuba 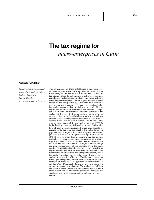 The government of Cuba established a tax regime for micro-enterprises as soon as it legalized the sector in 1993. It was designed to function in a difficult context in which a tax-paying culture did not exist, in which widespread noncompliance was feared, and in which some micro-entrepreneurs' incomes were high. The tax regime included advance monthly lump-sum payments, a 10% maximum amount of total revenues which could be deducted as costs in calculating taxable income, and an escalating tax schedule. This tax regime has a number of weaknesses which make it inequitable, inefficient and ineffective in revenue generation. The analysis of this essay indicates that the actual incidence of the tax is higher than the official tax scale when actual production costs exceed the maximum allowable 10%, even exceeding 100% in some circumstances. The up-front lumpsum tax payments result in marginal tax rates of 100% for initial levels of revenue, followed by a rate of 0% until a level of taxable income is reached where taxes payable according to the tax scale are equal to the initial lump-sum payment. The tax regime discriminates against micro-enterprises which have costs of purchased inputs in excess of 10% of gross revenues. It is regressive in that the tax rates are higher for lower-income micro-enterprises up to a fairly significant level of true net income. The micro-enterprise sector also faces a more onerous tax regime than the foreign and joint venture sector of the economy. From the standpoint of its impact on the efficiency of resource use, the tax regime restricts the entry of new firms into the sector and forces some out of business or underground, thereby reducing production, raising prices, reducing employment and reducing the generation of income. Finally, to the extent that firms "go underground," refrain from starting up, go out of business, or evade taxes, the government loses revenue. A number of modifications in the tax regime are suggested in order to overcome its weaknesses. These changes could help the sector to make a more valuable contribution to Cuba in terms of employment and income generation, increased production at lower real costs and prices, and increased tax collection.