Home » Publications » The potential for hub ports on the Pacific coast of South America
Available in: English 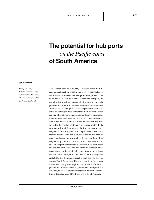 The external trade of a country is closely linked with its geographical location, with the transport services that cover the distance to markets, and the ports through which that trade passes. Recent advances in maritime transport, the growing international economic integration, and the privatization of ports in the countries on the Pacific coast of South America have given rise to expectations that ports could be developed that concentrate both domestic cargo and that of neighbouring countries for its subsequent redistribution: what are known as "hub ports". The main conclusion of the present study is that the potential for hub ports on the Pacific coast of South America is very limited. In the past, countries tried to prevent the foreign trade of their neighbours from using their ports to gain some kind of commercial benefit. Now, however, the situation has been reversed, and ports compete with each other for the trade of neighbouring countries. In itself, this competition is positive, but the problem is that in many cases it has been raised to a political level which has turned simple competition between ports into international competition between hypothetical future "hub ports". In view of the low degree of probability that the establishment of such ports on the west coast of South America will be a success, it might be more advisable to seek greater regional coordination of transport policies and of investments in port and land transport infrastructure, in order to promote integration between the countries of the Atlantic and Pacific coasts of South America.