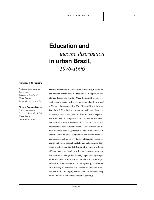 Despite tremendous macroeconomic instability, Brazil's urban income distributions in 1976 and 1996 appear, at first glance, deceptively similar. Mean household income per capita was stagnant, with a minute accumulated growth of 4.3% over the two decades. The Gini coefficient hovered just above 0.59 in both years, and the incidence of poverty (with respect to a poverty line of R$60/month at 1996 prices); was effectively unchanged at 22%. Yet, behind this apparent stability, a powerful combination of labour market, demographic and educational dynamics were at work, one effect of which was to generate a substantial increase in extreme urban poverty. Using a micro-simulation-based decomposition methodology which endogenizes labour incomes, individual occupational choices and education decisions, we show that the distribution of incomes was being affected, on the one hand, by a decline in average returns to both education and experience and by impoverishing changes in the structure of occupations and labour force participation (all of which tended to increase poverty);, and on the other hand by an increase in educational endowments across the distribution and a progressive reduction in dependency ratios (both of which tended to reduce poverty);.