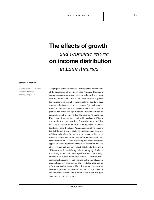 The purpose of this article is to investigate the determinants of the distribution of income in Latin America, focusing in particular on two questions: one is the relationship between the distribution and income, while the other is the impact of the package of structural economic reforms that have been adopted in Latin America in recent years. Two main conclusions are drawn from the econometric evidence. There appears to be a robust and significant relationship between the distribution and income. It has the inverted U-shape that Kuznets predicted, but this relationship has been shifting in a regressive direction over time. Growth is now a good deal less progressive than it used to be. In the aggregate that means that further growth in Latin America is unlikely to improve the distribution much, if at all, so supplementary measures will have to be taken. Among those suggested by the regressions are the maintenance of low inflation rates and investment in education. Generally speaking, the structural reforms appear to have a regressive effect on distribution, but that effect is small and not very robust statistically. Reforms in different areas have differing effects on equity. Trade reform is regressive in all of our specifications, but it is insignificant in all but the nationwide sample. Tax reform is unambiguously regressive, and opening up the capital account is unambiguously progressive. The results for trade and tax reform and capital account liberalization are the most robust and significant. For the other two reforms -privatization and financial reform- the available data were not good enough to give a clear answer.