Economic Survey of Latin America and the Caribbean 2008-2009: Policies for creating quality jobs 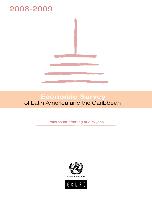 Economic Survey of Latin America and the Caribbean 2008-2009: Policies for creating quality jobs

The publication of the sixty-first edition of the Economic Survey of Latin America and the Caribbean, corresponding to 2008-2009, comes at a critical point in the economic development of the Latin American and Caribbean region. A growth phase that the region's recent history cannot equal in nature and duration has come to an end and output is contracting. The toll this state of affairs is taking on the well-being of the population will inevitably be reflected in setbacks in social variables. Two traits set the current situation apart from the many crises that have beset the region in decades past. First, this crisis did not originate in the region or even in another emerging economy, but in the world's largest economy, whence the effects spread worldwide, albeit with significant differences among countries and regions. Second, since the countries have (albeit with major exceptions) reduced their debt and built up their reserves during the boom years, the region overall is better prepared than in the past, and than other regions this time around, to tackle the crisis. These traits, in turn, have two implications. First, the rate of contraction forecast for 2009 is relatively moderate although, again, with sharp differences among the countries of the region. Second, the recovery depends to a great extent on an upturn in the global economy overall.The first part of this edition of the Economic Survey looks at the channels through which the crisis is affecting the economies of the region and its impact on variables such as economic growth, employment and external-sector indicators. It also discusses the strengths and weaknesses of the countries in dealing with the fallout from the global crisis and the economic policies they have deployed to this end. The analysis covers the performance of the region's economy in 2008 and the first semester of 2009 and concludes with a discussion of the outlook for the second half of the year. This chapter draws on an extensive statistical appendix.The nature of the recovery will depend greatly on developments in the world economy, but also on the way the countries prepare for the challenges of the future. Macroeconomic management of the crisis is crucial, but so, as ECLAC has emphasized on many occasions, is laying the foundations for sustainable growth, based on growing systemic competitiveness, greater social cohesion and environmentally sustainable production and consumption structures. A key task for the countries of the region is therefore to develop institutions that can help achieve those objectives. This year's Economic Survey looks in particular at the fabric of labour institutions which, in the recent past, have been at the centre of polarized confrontations and hotly contested debates. Today, however, opportunities have opened up for a more balanced discussion in which is it accepted that such institutions are called upon to fulfil a number of objectives and one-sided views have no place. The first chapter of the second part of this report reviews the historical development of labour institutions in the region, the great variety of institutions among countries and the role of their main components. The second chapter looks at recent changes in a number of specific institutions, the minimum wage, trade unions and collective bargaining, as well as unemployment protection systems. The evidence of their effects on the operation of the labour market is examined, along with alternatives for improving them. The third chapter is devoted to active labour-market policies, specifically training and skills-building, public-sector employment services, direct and indirect job creation and the promotion of own-account work. The fourth chapter discusses policy choices for promoting productive labour-market integration for young people and women, who often face exclusion and discrimination in the labour market. The fifth chapter sums up the conclusions regarding the challenges surrounding labour institutions and mechanisms for moving towards achievement of the objectives discussed.Lastly, the individual performance of each economy in 2008 and in the first half of 2009 is analysed in the country notes. In addition to the information provided in the country notes, trends in the main economic indicators are reported in the statistical appendix. The notes, together with the statistical appendix for each country, are contained in the CD-ROM that accompanies the printed publication and are also available on the ECLAC website (www.eclac.org). The tables presented in the statistical appendix provide ready access to data for recent years and allow the creation of spreadsheets. This CD-ROM also contains the electronic versions of the first and second parts of the printed publication. The statistical information presented in this publication reflects the data available up to 30 June 2009.