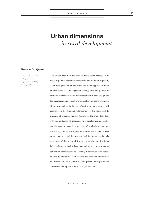 This article deals with the need to make some changes in the focus of policies for rural development and the relief of poverty. After noting the limitations of the traditional approaches taken by such policies, it is suggested (among other things); that the territorial dimension should be incorporated in their design, and the macroeconomic context and sectoral environment which condition those policies in the case of agriculture are reviewed, with emphasis on the structural heterogeneity of the sector and the existence of imperfect markets (section I);. The article then deals with the limitations of traditional rural development approaches and the need to reconsider the role of rural-urban migrations (section II);, after which it goes on to examine the links between urban issues and rural development, highlighting the need to take advantage of the potential of the establishment of suitable linkages between small urban communities and the surrounding agricultural areas (section III);. Finally, it addresses some aspects relating to institutions and stresses the need for institutional innovations which will make possible public-private participation and consensus-building at the local level (section IV);.