The Global Status Report on Road Safety (WHO, 2018), highlights that the number of annual road traffic deaths has reached 1.35 million. Road traffic injuries are now the leading killer of people aged 5-29 years. The burden is disproportionately borne by pedestrians, cyclists and motorcyclists, in particular those living in low and middle-income countries. The United Nations General Assembly Resolution A/RES/66/L.43/2012, encourages Member States to adopt and implement comprehensive national road safety legislation on the major risk factors through consistent and sustained enforcement activities;

Brazil, with a population of 209 million people, 105 million registered vehicles, of which 28% are motorcycles, has reached 35,375 road traffic deaths in 2017 (Source: Ministry of Health), representing a decrease of 5.3% compared to 2016 (37,345 deaths) and with the road traffic death rate per 100 000 population equal 17.1. The main risk factors related to these deaths are speeding, drinking and driving and non-use of helmets by motorcyclists.

In the State of Pará, the number of serious injuries in 2017 has increased by 13.8% compared to 2016. The state regional hospitals in five municipalities have received 88% and 90% of these serious injuries, respectively in 2016 and 2017. The amount paid for hospitalizations in 2017 was $ 1.7 million.

In 2018, the Federal Government launched the National Road Safety Plan 2019 - 2028 with the aim of reducing by 50% the road traffic death rate per 100000 population and national road traffic death rate per 10000 vehicles in the period 2019-2028. Based on the Pillar Safe User and Enforcement and Legislation Areas from the New Global Framework Plan of Action for Road Safety, the National Road Safety Plan 2019-2028 requires the State Traffic Departments to implement the following actions:

1. Increase speed cameras enforcement by 20%; 2. Enhance the enforcement activities on: 2.1. use of helmets for motorcyclists 2.2. speed management; 2.3. driving under the influence of alcohol and drugs; 2.4. prohibited overtaking on single lanes; 2.5. powered two wheelers vehicles; 2.6. use of seat belt; 2.7. others mandatory equipment and road traffic rules; 2.8. use of child restraints; 2.9 use of mobile phones while driving, and; 2.10. driving time and rest periods for professional drivers.

The national road traffic enforcement rules are established in the 1997 Brazilian Traffic Code and in the regulations of the National Traffic Council (CONTRAN). The National Road Safety Plan 2019-2028 contain the necessary mechanisms for effective compliance with the obligations and targets of the National Traffic System bodies. This project aims to contribute to decreasing road traffic deaths and injuries by means of technical assistance to support and to strengthen ongoing road traffic enforcement activities and enhancing the capacity of traffic officers at the state level to implement coherence enforcement controls.

To achieve this goal, the focus of the project will be on the improvement of the operational capacity of traffic enforcement in the State of Pará, increasing the efficiency and confidence level of the traffic officers, reviewing and updating their operational practices by means of specific training sessions based on the main risk factors and focused on the activities established in the National Road Safety Plan 2019-2028.

The project strategies are as follows:

a) meeting of the State Traffic Council (CETRAN-PA) to present, discuss and approve the implementation plan of the project. CETRAN-PA is the highest coordinator body of the National Traffic System in the State and all initiatives involving projects such as this must be submitted to the Council.

b) hold a training of trainers (multipliers) workshop with selected traffic officers, considering the international best practices, UN recommendations and instruments and main worries of civil society, academy and other relevant local stakeholders.

c) hold training sessions in selected cities, focused on improving and increasing the knowledge of traffic officers related to: c.1) use of helmets for motorcyclists; c.2) speed management; c.3) driving under the influence of alcohol and drugs; c.4) prohibited overtaking on single lanes; c.5) powered two wheelers vehicles; c.6) use of seat belt; c.7) others mandatory equipment and road traffic rules; c.8) use of child restraints; c.9) use of mobile phones while driving, and; c.10) driving time and resting periods for professional drivers, using international and regional training elements, adapting them to local situation and normative.

e) develop a workshop to present the main results.

END_OF_DOCUMENT_TOKEN_TO_BE_REPLACED 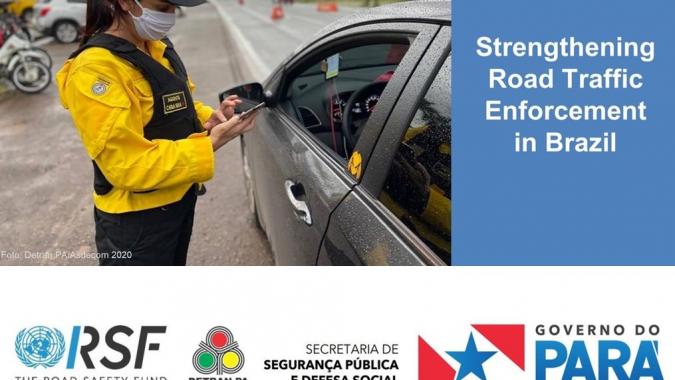