In the framework of the Nexus Regional Dialogue Program, on September 5, 2019, GIZ in collaboration with the United Nations Economic Commission for Latin America and the Caribbean (ECLAC) organized the first Nexus virtual forum. The event was attended by around 100 participants, representatives from 19 countries, and 72 organizations. The objective of this first meeting focused on discussing how the Nexus approach can contribute to the management of social and environmental conflicts in infrastructure projects such as multipurpose dams.

Discussions were held around lessons learned and good practices in multipurpose water projects, for example, the importance of building trust among stakeholders, accurate projections about natural resources, irrigation and water use efficiency, the need for updated regulations, participatory prioritization, planning, effective communications, and other related issues.

The event started with the participation of Mr. Octavio Sotomayor, from the Natural Resources Division of ECLAC, who welcomed the audience and panelists. Ms. Maria Ana Rodriguez, from the Nexus Global Secretariat, briefly presented the Nexus Regional Dialogue Program. Mr. Antonio Levy, Regional coordinator of the Nexus Dialogue in Latin America, oversaw moderating the meeting. The virtual forum was attended by three expert panelists from Chile, Mexico, and the Niger River basin (West Africa). Mr. Rodrigo García, Former Regional Secretary of the Ministry of Agriculture for the Biobío region, presented the conflicts between farmers and hydroelectric plants in the Laja lagoon. Mr. Luca Ferrini, Coordinator of the Nexus Program in the Niger River Basin, presented the Nexus conflict resolution experience in the framework of the Niger River basin. Mr. Paul Alfaro Nava, Deputy Manager of Geology of the General Technical Sub-directorate of the National Water Commission (CONAGUA) of Mexico, presented the government's management in Mexico in the socialization of the El Realito and El Zapotillo dam projects. Finally, expert panelists interacted with the online audience through a question and answer section. 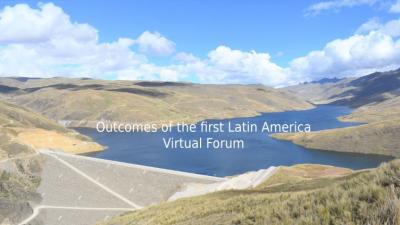