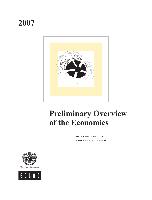 During much of 2007, the Latin American and Caribbean region witnessed a great deal of volatility in financial markets owing to uncertainty about the impact that the financial crisis in the United States could have on that country’s and the world’s real economies. This crisis has not, however, had any significant repercussions in terms of the level of economic activity or international trade, and most of the economies in the region have continued to grow rapidly. This growth —estimated at 5.6% for the region as a whole— has been driven primarily by domestic demand, with particularly sharp increases being noted in private consumption and gross capital formation.

The strength exhibited by domestic demand pushed up imports sharply, while the volume of goods exports rose more slowly than the region’s GDP for the first time in six years. All the same, most natural-resource exporters have benefited from higher price levels, and the region marked up yet another improvement (this time of about 2.6%) in its terms of trade. Higher export prices were also a contributing factor in the region’s fifth consecutive surplus on the balance-of-payments current account. The considerable upswing in imports brought the surplus down from 1.7% of GDP in 2006 to 0.7% in 2007, however, thus reversing the upward trend in the current account surplus observed since 2002.

The region also received a larger inflow of foreign direct investment than at any time since 1999 (about US$ 95 billion), as well as a somewhat less remarkable but still sizeable inflow of portfolio investment. These flows were reflected in a hefty surplus on the financial account. As a result, net international reserves climbed steeply (by the equivalent of 3.5% of regional GDP), while the region’s external debt, measured as a percentage of GDP, continued to shrink; however, its levels of country risk rose in response to turbulence in financial markets.

Economic policymakers were faced with a variety of challenges. Fiscal revenues were up, thanks to high growth rates, efforts to streamline tax collection and, in some countries, the high prices brought by natural resources. Public spending also rose steeply, however, and, as a result, the overall balance on the countries’ central government accounts (which, as a simple average, had yielded a surplus in 2006) showed a deficit in 2007. The primary surplus was smaller as well.

At the world level, fuel and food prices were on the rise. In some countries, this trend was exacerbated by adverse weather conditions that depressed the supply of agricultural products. In some cases, demand pressures were also a contributing factor. The end result was that, for the first time since 2002, the region’s inflation rate was close to 6%, as compared to 5.0% in 2006. Since, in many cases, this increase in price levels was combined with strong domestic demand, in many countries the authorities decided to raise interest rates. In a number of instances, these decisions involved a number of trade-offs, since the copious foreign-exchange inflows triggered by current account movements (trade surpluses, remittances from emigrant workers), together with sizeable inflows on the financial account (foreign direct investment and portfolio investment), as well as the weakness of the dollar and higher inflation, resulted in the appreciation of many of the countries’ currencies in real terms.

The trends observed in the region’s labour markets in earlier years carried over into 2007. Job creation remained brisk and was once again centred around wage employment. This led to a reduction in the unemployment rate from 8.6% in 2006 to 8.0% in 2007. The upturn in formal employment was a particularly outstanding feature of this trend, while real wages rose at a measured pace (1.5% at the regional level). The increase in total wages contributed to a further reduction in poverty and to a notable increase in household consumption. In many countries, these factors, combined with a considerable expansion of credit, generated a significant demand-side impulse for economic growth.

Thus, a number of the economic features seen in recent years were repeated in 2007: high economic growth rates in historical terms (although other world regions attained higher rates), surpluses on the primary fiscal and current accounts, an improvement in the terms of trade, lower unemployment, higher international reserves and a smaller external debt. There were also some changes, however, although on the whole they were fairly moderate: a slackening of the growth rate in the volume of exports, higher inflation and a reversal of the steady upward trend in the fiscal surplus.

The outlook for 2008 will depend, to a large extent, on developments in the world economy. Although the most likely scenario is a slowdown in the United States economy followed by a partial recovery, the possibility of a recession cannot be ruled out. The more probable outcome, however, remains that of a fairly slight slackening of the pace of growth in the world economy that would have a limited impact on emerging economies. In the case of Latin America and the Caribbean, these factors are expected to result in a moderately lower economic growth rate in 2008 (4.9%) than in 2007.