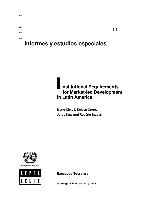 Abstract This paper seeks to provide a systematized framework for the main ideas that have been developed by ECLAC concerning the effects that market-led reforms have had on labour, financial and technology markets. In order to explore these questions further, a research project has been undertaken by ECLAC with the sponsorship of the German Agency for Technical Cooperation (GTZ). The project deals with the institutional requirements for properly functioning financial, technology and labour markets. Particular attention is being devoted to the institutional forces affecting market access by traditionally excluded actors, such as small and medium-sized enterprises (SMEs) in the case of long-term financial and technology markets, poor households in the case of housing finance, and female workers in the case of the labour market. As a consequence of the market-led reforms, Latin America has transformed its pattern of development and the way in which its brand of capitalism is configured. At the same time, the reform process is shown to have yielded unsatisfactory results when the performance level achieved in each factor market is evaluated. Labour markets exhibit a range of difficulties in reducing unemployment and informal employment. Financial markets are characterized by concentration and by the increasing difficulties encountered by the weaker agents in accessing resources. And, in most of the economies in the region, the role played by technology markets in creating and diffusing technology domestically is being downgraded. This poor performance has co-evolved along with a reduction in the State's participation in the economy and an increasing power asymmetry in favour of private agents. The above difficulties seem to be related to the persistence of various types of market failures and the lack of non-market institutions capable of strengthening and supporting the operation of factor markets. The persistence of imperfect information, the lack of initial entitlements and gaps in learning capabilities have hindered the adaptation of various actors to the discipline of a new macro policy and incentive regime. Because of these underlying weaknesses in the institutional fabric inherited by the region, its factor markets have functioned very imperfectly and have failed to deliver what was expected of them in terms of a better long-term overall performance.