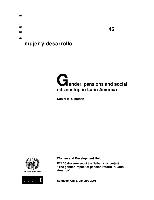 A major part of the problem of providing high-quality welfare and social protection to the members of a society lies in the issue of how to distribute the responsibility for these services within the society -a problem referred to in this paper as the "care dilemma". Different historical junctures and forms of social organization have witnessed different responses to this dilemma. Strictly speaking, the solution is a variable that depends on culture, level of institutional development, the distribution of the resources of power in a society and the ability of the different relevant stakeholders to mobilize those resources. Although these factors have given social subsystems such as the State, the market and various associative communities a significant role to play in care and welfare, much of the burden has always fallen on the family, even in today's developed societies. Behind this fact lies an important gender basis which has significant implications for the status of women in society, for when the family is the principal provider of care and welfare services, women must either remain outside the labour market or face the difficulties of reconciling their productive and reproductive roles -difficulties that men do not face in this context.
One major consequence of this has been that women's rights, both symbolically and in practice, have been closely tied to welfare and social protection for the family. When society does not adequately recognize the functional necessity of these services -i.e., when they are provided in a highly informal fashion- the tasks that women perform in providing them are considered "natural" to them as women, and the recipients of care are seen as requiring, or legitimately deserving, the services. For care and welfare to receive significant recognition -i.e., to become formal, in any sense of the word- three necessary but not always sufficient associated phenomena must come together. The first is a cultural change in the perception of the care recipient, who is no longer seen as needy or as an object of charity, but as a holder of entitlements. In other words, social citizenship is institutionalized. The second factor is that the development of social citizenship in the complex modern environment requires that care functions be transferred to selfregulating systems: the State and/or the market. Finally, in order for social citizenship to materialize, eligibility requirements must be defined, or the defining conditions of citizenship itself must be established. In some cases, merely being a member of a national community confers entitlement, while in other cases participation in the labour market is the determining factor. However, social citizenship for women has always been a function of interdependent family relationships and reproductive roles, regardless of how society distributes caregiving responsibilities.
This paper shows how this is reflected in Latin America. It provides a broad analysis of the ways in which caregiving functions have been distributed historically and considers their gender implications. It focuses primarily on the comparative analysis of the gender-related features of pension benefits in modern care structures; i.e., those in which care is highly formalized and where, as a result, entitlements deriving from social citizenship are guaranteed. The analysis shows that, despite profound (though not radical); changes in the systemic distribution of care as a result of pension reform, the distribution of caregiving responsibilities in society has not changed in the least. Hence, public policy and pension law continue to consider that women are directly or indirectly responsible for these tasks, and the family remains the locus where they become citizens. Finally, this paper points out the policy dilemmas that can arise in any attempt to achieve equality of citizenship between the sexes under the new pension systems. The paper concludes that the most effective policy is one that aims to ensure and facilitate women's access to the labour market and remove the obstacles they face in that regard. As a precondition, gender inequalities in the labour market must be eliminated.