Economic impact of disasters: evidence from DALA assessments by ECLAC in Latin America and the Caribbean 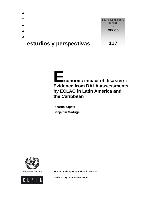 Economic impact of disasters: evidence from DALA assessments by ECLAC in Latin America and the Caribbean

Over the last 35 years the United Nations Economic Commission for Latin America and the Caribbean (ECLAC) has assessed major disasters in the Latin American region. Based on those exercises, which that have been conducted in a systematic manner using an evolving but comparable methodology over the years1, there is now historical evidence of the economic consequences these events have on the region's economies. This evidence-based approach sheds light on the link between economic performance, development dynamics and how disasters, as external shocks, generate lingering effects of different relative importance. The effect of disasters are most severe or visible in smaller, less developed, vulnerable, non diversified economies which are highly dependent on natural resources or on environmental services, interpreted in a broad sense to include services such as supporting tourism. It could be argued that this evidence is neither statistically fully representative (assessments are conducted as demand driven exercises at the request of ECLAC's member governments), nor comprehensive, as only major events have been assessed and there is a yearly cumulative recurrence of minor events that have not been fully assessed. It could also be argued that improvements in the quality of both baseline data and data on disaster impacts as well as methodological improvements may lead cause disaster impact to appear to grow more over time than they actually did. In addition to the case by case quantifications that constitute the historical record of disasters that will be the basis for this document, ECLAC has also undertake, some selected case studies on specific countries that quantify the economic impact of disasters over time in those countries.""