From beneficiaries to citizens: Access by and treatment of women in Latin American pension systems 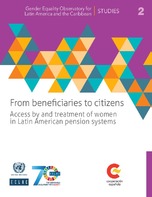 From beneficiaries to citizens: Access by and treatment of women in Latin American pension systems

Women constitute the majority of the older adult population, but, with some exceptions, they are underrepresented among pension recipients. Although progress has been made in the region with regard to women’s inclusion in non-contributory pension programmes, these pension payments are lower and do not allow women to escape poverty.

Mainstreaming the gender dimension into the design of pension system reforms is a challenge. Women must be included in pension systems in order to address the population’s new age structure, to meet women’s demand and need for economic autonomy, and to exercise their rights. It is also essential for the systems’ sustainability.

As this study will show, recognition of care work is key to achieving greater gender equality in pension systems. Such affirmative action is starting to be enforced in the pension systems of some countries of the region, although it has a greater impact on systems with a redistributive approach.