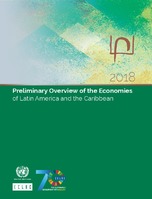 The Preliminary Overview of the Economies of Latin America and the Caribbean, one of ECLAC’s most important annual reports, analyzes in its 2018 edition the economic performance of the region throughout the year, the international context and macroeconomic policies implemented by countries, while also providing an outlook for 2019.
The Latin American and Caribbean countries are facing a complex global economic scenario over the next few years, with slower growth expected in both the developed countries and the emerging economies, along with increased volatility in international financial markets. This is in addition to structurally weaker international trade, exacerbated by trade tensions between China and the United States.Global growth projections have been revised slightly down, for both 2018 and 2019, and are at risk of further downward revision. The global economy is expected to close 2018 with growth of 3.2%, similar to that recorded in 2017, when synchronous growth produced rising growth rates in the majority of countries.