Gender equality plans in Latin America and the Caribbean: Road maps for development 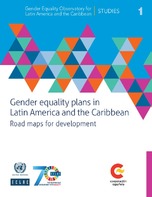 Gender equality plans in Latin America and the Caribbean: Road maps for development

This study by the Gender Equality Observatory for Latin America and the Caribbean presents a review and analysis of the processes of drawing up the gender equality plans now in place in Latin American and Caribbean countries. Since they were first developed in the 1990s and, more particularly, in the twenty-first century, these plans have become real road maps towards gender equality and guaranteeing the rights of women for States in the region, as well as a sign of the political will to make progress in this area.

Analysis of the processes by which these plans were prepared identifies aspects that could improve their scope and impact, both in terms of ending the subordination of women and tackling discrimination against them, and in relation to the need to mainstream the gender perspective in public policies.

Today, Latin American and Caribbean countries face numerous and complex challenges in the area of gender equality, which require the sustained and cross-cutting commitment of the State to women’s human rights and autonomy. The region has a Regional Gender Agenda that must form part of the discussion in relation to future equality plans and that, together with the 2030 Agenda for Sustainable Development, constitutes a frame of reference for proposals and goals.