The European Union and Latin America and the Caribbean vis-à-vis the 2030 Agenda for Sustainable Development: The environmental big push 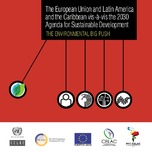 The European Union and Latin America and the Caribbean vis-à-vis the 2030 Agenda for Sustainable Development: The environmental big push

All over the world there are alarming signs that point to an increase in inequality and a worsening of the environmental crisis, particularly in terms of climate change. New factors currently emerging include large-scale migratory movements, the acceleration of the technological revolution, the arrival of new actors on the international economic stage —particularly China and, more recently, India— and the negotiation of mega-agreements to regulate international trade, investment and intellectual property.
Given the complexity of the situation, the international community has mobilized via a wide-ranging multilateral debate to provide a broad and ambitious response. In the past few months, a series of collective actions have been taken towards the definition of a new, more sustainable and egalitarian development paradigm. In September 2015, the United Nations General Assembly adopted the 2030 Agenda for Sustainable Development and the 17 Sustainable Development Goals, recognizing that climate change and development
are inseparable. Accordingly, with the signing of the Paris Agreement in December 2015, both industrialized nations and developing countries undertake to manage the transition towards a low-carbon economy. As of early October 2016, the Agreement had been ratified by 77 parties, which are jointly responsible for 59.9% of global greenhouse gas emissions. Thanks to this “domino effect” of ratifications, the Paris Agreement will enter into force much earlier than expected: on 4 November 2016.
For the countries of the Community of Latin American and Caribbean States (CELAC) and the European Union, the 2030 Agenda and the Paris Agreement highlight the need to move towards levels of consumption and production that are compatible with the environment. Shared values and the strong complementarity that exists between the two regions could help to generate an environmental big push, enabling a move towards new development paths; in other words, progress towards an investment pattern that fosters
innovation and structural change while decoupling economic growth from carbon emissions.
In this document, the Economic Commission for Latin America and the Caribbean (ECLAC) and the EU-LAC Foundation offer an overview of the main determinants of economic, production, social and environmental conditions in the countries of the two regions, as a contribution to the Meeting of Foreign Ministers of CELAC and the European Union, to be held in Santo Domingo on 25 and 26 October 2016.

Foreword .-- Introduction .-- I. The new consensus: the Sustainable Development Goals .-- II. Latin America and the Caribbean and the European Union: coping with the world economic situation .-- III. The social situation: progress early in the decade .-- IV. New vectors of transformation: the digital economy and climate change .-- V. Final considerations.