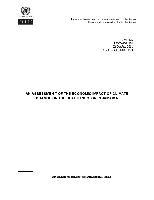 Climate change is a naturally occurring phenomenon in which the earth‘s climate goes through cycles of warming and cooling; these changes usually take place incrementally over millennia. Over the past century, there has been an anomalous increase in global temperature, giving rise to accelerated climate change. It is widely accepted that greenhouse gas emissions from human activities such as industries have contributed significantly to the increase in global temperatures.
The existence and survival of all living organisms is predicated on the ability of the environment in which they live not only to provide conditions for their basic needs but also conditions suitable for growth and reproduction. Unabated climate change threatens the existence of biophysical and ecological systems on a planetary scale.
The present study aims to examine the economic impact of climate change on health in Jamaica over the period 2011-2050. To this end, three disease conditions with known climate sensitivity and importance to Jamaican public health were modelled. These were: dengue fever, leptospirosis and gastroenteritis in children under age 5. Historical prevalence data on these diseases were obtained from the Ministry of Health Jamaica, the Caribbean Epidemiology Centre, the Climate Studies Group Mona, University of the West Indies Mona campus, and the Meteorological Service of Jamaica. Data obtained spanned a twelve-year period of 1995-2007. Monthly data were obtained for dengue and gastroenteritis, while for leptospirosis, the annual number of cases for 1995-2005 was utilized.
The two SRES emission scenarios chosen were A2 and B2 using the European Centre Hamburg Model (ECHAM) global climate model to predict climate variables for these scenarios. A business as usual (BAU) scenario was developed using historical disease data for the period 2000-2009 (dengue fever and gastroenteritis) and 1995-2005 (leptospirosis) as the reference decades for the respective diseases. The BAU scenario examined the occurrence of the diseases in the absence of climate change. It assumed that the disease trend would remain unchanged over the projected period and the number of cases of disease for each decade would be the same as the reference decade.
The model used in the present study utilized predictive empirical statistical modelling to extrapolate the climate/disease relationship in time, to estimate the number of climate change-related cases under future climate change scenarios. The study used a Poisson regression model that considered seasonality and lag effects to determine the best-fit model in relation to the diseases under consideration.
Zhang and others (2008), in their review of climate change and the transmission of vector-borne diseases, found that:
―Besides climatic variables, few of them have included other factors that can affect the transmission of vector-borne disease….‖ (Zhang 2008)
Water, sanitation and health expenditure are key determinants of health. In the draft of the second communication to IPCC, Jamaica noted the vulnerability of public health to climate change, including sanitation and access to water (MSJ/UNDP, 2009). Sanitation, which in its broadest context includes the removal of waste (excreta, solid, or other hazardous waste), is a predictor of vector-borne diseases (e.g. dengue fever), diarrhoeal diseases (such as gastroenteritis) and zoonoses (such as leptospirosis).
In conceptualizing the model, an attempt was made to include non-climate predictors of these climate-sensitive diseases. The importance of sanitation and water access to the control of dengue, gastroenteritis and leptospirosis were included in the Poisson regression model. The Poisson regression model obtained was then used to predict the number of disease cases into the future (2011-2050) for each emission scenario. After projecting the number of cases, the cost associated with each scenario was calculated using four cost components.
1. Treatment cost morbidity estimate. The treatment cost for the number of cases was calculated using reference values found in the literature for each condition. The figures were derived from studies of the cost of treatment and represent ambulatory and non-fatal hospitalized care for dengue fever and gastroenteritis. Due to the paucity of published literature on the health care cost associated with leptospirosis, only the cost of diagnosis and antibiotic therapy were included in the calculation.
2. Mortality estimates. Mortality estimates are recorded as case fatality rates. Where local data were available, these were utilized. Where these were unavailable, appropriate reference values from the literature were used.
3. Productivity loss. Productivity loss was calculated using a human capital approach, by multiplying the expected number of productive days lost by the caregiver and/or the infected person, by GDP per capita per day (US$ 14) at 2008 GDP using 2008 US$ exchange rates.
4. No-option cost. The no-option cost refers to adaptation strategies for the control of dengue fever which are ongoing and already a part of the core functions of the Vector Control Division of the Ministry of Health, Jamaica. An estimated US$ 2.1 million is utilized each year in conducting activities to prevent the post-hurricane spread of vector borne diseases and diarrhoea. The cost includes public education, fogging, laboratory support, larvicidal activities and surveillance. This no-option cost was converted to per capita estimates, using population estimates for Jamaica up to 2050 obtained from the Statistical Institute of Jamaica (STATIN, 2006) and the assumption of one expected major hurricane per decade. During the decade 2000-2009, Jamaica had an average inflation of 10.4% (CIA Fact book, last updated May 2011). This average decadal inflation rate was applied to the no-option cost, which was inflated by 10% for each successive decade to adjust for changes in inflation over time.