Home » Publications » Economic Survey of Latin America and the Caribbean 2005-2006
Available in: EnglishEspañol

Economic Survey of Latin America and the Caribbean 2005-2006 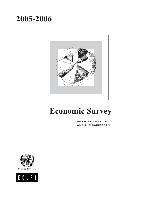 This year’s edition of the Economic Survey of Latin
America and the Caribbean is the fifty-eighth in the
series. It is divided into two parts: the first analyses
the main features of the regional economy, while
the second examines the situation in the individual
countries of Latin America and the Caribbean. A full
statistical appendix is included, containing regional
and national data.
The introduction of the first part outlines the
relatively favourable performance of the region’s
economy as a whole in recent years and analyses the
factors which could jeopardize that performance. It
underlines the growing uncertainties in the global
economy, which could endanger the prospects for
growth in the region. Nonetheless, it draws attention
to improvements in a number of economic indicators,
reflecting the reduced vulnerability of the region’s
economies to any adverse developments in the global
situation.
The following chapters are devoted to the
international situation, macroeconomic (fiscal,
exchange-rate and monetary) policy, and the region’s
performance internally (level of economic activity,
inflation, employment and wages) and externally
(trade balance, transfers and income, capital flows and
external debt). A statistical appendix illustrates trends
in the main indicators at the regional level.
One of the principal challenges facing the region
is export diversification, especially the need to offer
more knowledge-intensive goods. The special chapter
in this edition of the Economic Survey provides an
analysis from the macroeconomic viewpoint of the
ways in which that process is affected by levels of, and
trends in, investments and real exchange rates.
The second part of the document provides
overviews of macroeconomic policies and trends in
the Latin American and Caribbean countries in 2005
and the first half of 2006. The country reports include
tables on the main economic indicators.
The statistical information contained in this
publication has been updated to 30 June 2006.