The economics of climate change in Latin America and the Caribbean: Paradoxes and challenges of sustainable development 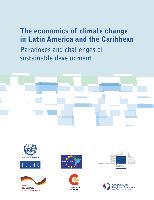 The economics of climate change in Latin America and the Caribbean: Paradoxes and challenges of sustainable development

The robust growth of Latin American and Caribbean economies in recent years has led to an improvement in economic and social conditions in the region. It has also had collateral negative effects, however, such as more air pollution in urban areas and a serious deterioration of various natural assets, including non-renewable resources, water resources and forests. There are economies and societies within the region that are highly vulnerable to all sorts of adverse impacts of climate change, and whose production structures and consumption patterns still tend to leave a large carbon footprint. This situation has reached the point of undermining the foundations of the region’s economic buoyancy. Latin America and the Caribbean therefore needs to make the transition in the years to come towards a sustainable form of development that will preserve its economic, social and natural assets for future generations and leave them with a legacy of a more equal, more socially inclusive, low-carbon form of economic growth. Viewed from this standpoint, the climate change challenge is also a sustainable development challenge, and if it is to be addressed successfully, a global consensus that recognizes the asymmetries and paradoxes of the problem will have to be reached..