Home » Publications » Economic Survey of Latin America and the Caribbean 2014: Challenges to sustainable growth in a new external context
Available in: EnglishEspañolPortuguês

Economic Survey of Latin America and the Caribbean 2014: Challenges to sustainable growth in a new external context 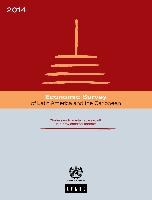 The 2014 edition of the Economic Survey of Latin America and the Caribbean consists of three parts. Part I considers the economic performance of the region in the first half-year as well as the outlook for the year as a whole, against the backdrop of a world economy marked by opportunities and setbacks. The causes of the modest economic growth forecast for the year are examined and attention is drawn to some of the challenges facing public policymakers.

Part II discusses aspects of medium- and long-term economic development in Latin America and the Caribbean. The new external context (slower growth in the emerging economies, a sluggish performance by the developed countries, less buoyant commodity prices and more costly external financing) poses further challenges for economically and socially sustainable growth and development in the region. In the effort to define these challenges, emphasis is placed on the region’s heterogeneity and on the diverse structural issues and specific vulnerabilities that macroeconomic policies must address in each country. The drivers of growth in recent decades are analysed: it is pointed out that sweeping changes will be needed to underpin the new economically and socially sustainable growth and that this growth is contingent on significantly higher levels of investment and productivity.

Part III contains the notes relating to the economic performance of the different countries of the region in 2013 and the first half of 2014, together with their respective statistical annexes, which present the main economic indicators of the countries of Latin America and the Caribbean. The cut-off date for updating the statistical information in this publication was 30 June 2014.