Latin America and the middle-income trap 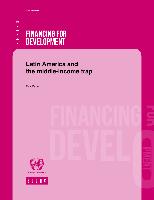 Promising economic growth during the 2000s obfuscates the reality that Latin American countries are
facing the acute threat of a middle-income trap. In a review of the literature on the middle-income trap I
distinguish two approaches to the middle-income trap: one focuses mainly on the lack of structural
change, the driving forces behind it, and the national and global context in which it unfolds; the other
stresses growth slowdowns irrespective of time and place. I offer an extension of the structural change
approach with an emphasis on the implications of the current globalization process. A productive
capabilities-focused analysis reveals serious gaps in social and firm-level capabilities in Latin America
economies, though the magnitude differs across indicators and countries. The experiences of China and
small latecomers trying to move from the middle to the high-income level (Chile, the Dominican
Republic, Jordan, Ireland, and Singapore) suggest that a cohesive productive capabilities-focused
development strategy holds out great promise for generating growth-enhancing structural change. I
conclude with a discussion of the key challenges Latin American countries have to overcome for the
successful implementation of such a strategy to avoid the middle-income trap.