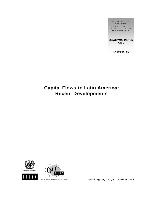 The external environment has deteriorated sharply as a result of the spiraling financial turmoil, and has led to a weakening in commodity prices and fears of a worldwide recession. Latin America and the Caribbean's fastest expansion in 40 years may be threatened as the global credit crunch makes financing scarce and squeezes demand for the region's commodities. This time around the region is better positioned to weather the crisis than in the past, given improvements in macroeconomic and financial policies as well as a reduced net dependency on external capital inflows. However, Latin American markets are feeling the effects of the crisis through a slowdown in capital inflows, large declines in stock price indexes, significant currency adjustments and an increase in debt spreads. Volatility has soared, with the closely watched Chicago Board Options Exchange Volatility Index moving to an all-time high of 70.33 on October 17, indicating that fear (rather than greed) has been ruling the markets.After reaching record lows in May 2007, emerging markets bond spreads are now above pre-Asian crisis levels. The JPMorgan EMBI+ Latin American composite widened by 146 basis points in the third quarter, with spreads reaching 448 basis points at the end of September. Spreads have widened sharply in recent weeks as foreign investors cut back regional exposure for the safety of U.S. Treasuries. The ongoing lack of liquidity and subsequent liquidation of assets is leading to a collapse in asset prices and a sharp widening in spreads. Daily spreads in October have risen to levels not seen since December 2002, making it much more difficult for governments that need financing to get it. Risk premiums for Latin corporates and sovereigns have risen substantially, but have remained well below U.S. junk (high-yield) bonds. Latin corporates are facing a steep rise in foreign exchange borrowing costs (although less than firms in other emerging markets), which raises concerns that refinancing risks will climb.So far, emerging markets vulnerabilities have been more focused on corporates, as sovereigns have improved public debt dynamics and countries' financing needs are under control. Market performance has been driven by the rapid deterioration of emerging markets bank and corporate market, as well as ongoing losses in emerging markets equities. From January to September 2008, the Morgan Stanley Capital International (MSCI) Latin American Index lost almost 28%, while the Emerging Markets Index lost 37% and the G-7 Index lost 24%. While in 2007 the Latin America component gained 47%, almost nine times as much as the MSCI-G7 index for developed markets, since mid-September 2008 stocks in Latin America have been doing worse than stocks in developed countries, as concerns about access to credit and the adverse impact of sharp falls in commodity prices and in local currencies contribute to increased risk aversion and to outflows of capital. Many governments in the region have used revenue from the commodity boom to pay down debt and build reserves. Now, facing a global financial crisis and the threat of recession in developed countries, the biggest question for Latin America is how long and deep this cyclical downturn will be, and how much it is going to reduce commodity prices. Prices for commodities such as soy, gold, copper and oil, which helped fund the region's boom, have fallen 28% since their July 2 high, according to the RJ/CRB Commodity Price Index. According to Morgan Stanley (in a September 29 report), should prices return to their 10-year average, Latin America's balanced budgets would quickly revert to a deficit of 4.1% of GDP. As risk aversion increases, investors are rapidly pulling out massive amounts of money, creating problems for local markets and banks. There is an ongoing shortage of dollars (as investors liquidate assets in Latin American markets), and as currencies depreciate, inflation concerns increase despite the global slowdown. In Brazil and Mexico, central banks deployed billions of dollars of reserves to stem steep currency declines, as companies in these countries, believing their local currencies would continue to strengthen against the U.S. dollar, took debts in dollars. Some companies also made bets using currency derivatives that have led to losses in the billions of dollars. Dramatic currency swings have caused heavy losses for many companies, from Mexico's cement giant Cemex SAB to the Brazilian conglomerate Grupo Votorantim. Mexico's third-largest retailer, Controladora Comercial Mexicana, declared bankruptcy recently after reporting huge losses related to exchange rate bets. As concerns about corporate exposure to dollar-denominated derivatives increases, yields on bonds issued by many of Brazil's and Mexico's leading companies have started to rise, sharply raising the cost of issuing new debt. Latin American external debt issuance came to a halt in the third quarter of 2008, totaling only US$ 690 million. The cost of obtaining loans for capital expenditures, M&A and debt refinancing is also rising substantially for Latin American corporates amid contagion from the U.S. financial crisis. According to bankers, a protracted trend of shortening tenors and widening spreads has intensified in the past few weeks, indicating that bank lending is quickly following the way of bonds and equity. Finally, money transfers from Latin American migrants are expected to decline for the first time this decade, as a result of economic downturns in the U.S. and Spain, inflation and a weaker dollar. The Mexican Central Bank announced that money transfers from Mexicans living in the U.S. dropped a record 12.2% in August. In 2008, migrants from the region will send some 1.7% less in remittances year-on-year when adjusted for inflation, according to the IADB, compounding the adverse effects of the deepening financial turmoil.