Updated Economic Overview of Latin America and the Caribbean 2013 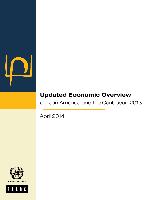 Updated Economic Overview of Latin America and the Caribbean 2013

This report updates the analysis set out in the Preliminary Overview of Latin America and the Caribbean 2013,
released in December 2013, on the basis of official data published by the countries in the region in the subsequent
months, and presents a revised economic outlook for 2014. In addition, it examines the external factors influencing
the region’s performance and their impact on the different components of the balance of payments and summarizes
the challenges and main trends in relation to monetary, exchange-rate and fiscal policy. It confirms the deceleration
of growth analysed in the Preliminary Overview, giving a revised regional rate of 2.5% for 2013. This slowdown
curbed job creation, but did not drive up the rate of unemployment. The second part of the report reviews the main
internal and external factors that will determine the region’s economic performance in 2014. Although the world
economy is expected to pick up with respect to 2013, Latin America and the Caribbean will grow at a similar rate
to the previous year as a result of several factors.