The United States and Latin America and the Caribbean: highlights of economy and trade 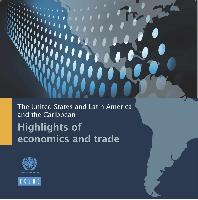 The United States and Latin America and the Caribbean: highlights of economy and trade

This publication is a contribution by the Economic Commission for Latin America and the Caribbean (ECLAC) to the analysis of trade and investment relations between the United States of America and Latin America and the Caribbean, on the occasion of the visit of President Barack Obama to Brazil, Chile and El Salvador in March 2011. The early years of this new decade have brought good news for Latin America and the Caribbean. The region weathered the international crisis with unprecedented resilience and emerged from it sooner and more strongly than the developed economies. It grew by 6% in 2010, and is expected to grow by over 4% in 2011. The region's economic reforms of past decades, its fiscal and macroeconomic prudence and its sound financial supervision, together with ever closer commercial ties with China and other emerging economies, have allowed it not only to successfully navigate through the worst international crisis of the past 80 years but also to enter the new decade with a promising outlook for growth and advances in quality of life. For the first time in its history, the region achieved during the past decade a combination of high growth, macroeconomic stability, poverty reduction and improvement in income distribution. On the strength of the foregoing and of its privileged endowment in natural resources, energy, water and biodiversity, the Latin American and Caribbean region will be called upon to assume an increasingly larger role in the global economy. At Davos and other specialized forums, it has been said that this could be the decade of the Latin American and Caribbean region and that, with regard to global economic recovery, the region is today firmly part of the solution. The region's resilience to, and strong recovery from, the international financial crisis have renewed the interest of the European Union in strengthening linkages with it. At the same time, the Asia-Pacific region —particularly the People's Republic of China— has become a privileged trading partner for Latin America and the Caribbean. These closer trade and investment links have been both a cause for and a result of the increasing number of trade agreements already in force or under negotiation that link various countries of the region with the European Union and Asia-Pacific. In this context of special opportunities and diversification of trading partners, the share of the United States of America in the region's trade has been shrinking. More importantly, there is a perception in Latin America and the Caribbean that the United States lacks strategic vision vis-à-vis the region. In past decades, the Alliance for Progress, the Initiative for the Americas and, later, the Free Trade Area of the Americas (with which ECLAC, the Inter-American Development Bank and the Organization of American States collaborated through the Tripartite Committee) were all ambitious United States initiatives for regional cooperation. Today no such initiatives exist. Despite recent improvements on many fronts, the Latin American and Caribbean region faces some formidable structural challenges. It still has the highest indices of inequality in the world, as well as serious lags in technology, innovation and competitiveness. Nevertheless, the region, together with its main partners, is approaching these challenges as opportunities for new partnerships that promote growth and development through increased trade and investment. The United States can and should be an active partner of the region in this endeavour. The visit of President Obama to three Latin American countries provides the United States with a unique opportunity to revitalize hemispheric relations. It could do so by presenting proposals for a strategic dialogue and for new hemispheric initiatives in trade and investment to strengthen cooperation between the United States and the region.