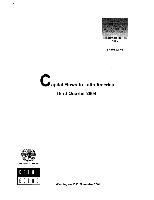 In the third quarter of 2004, the positive interaction of external and domestic factors in the Latin American region created a favorable environment for capital inflows. Among the external factors, an unprecedented amount of global liquidity, combined with an environment of low risk-free rates and a search for yield, was one of the main driving forces in the third quarter. Liquidity and low rates benefited not only emerging market debt, but all risky assets, which have become highly correlated among themselves. However, in the case of emerging markets, and Latin American markets in particular, the driving forces go beyond abundant global liquidity: there were improvements not only in emerging market economies, but in the health and structure of the emerging market asset class as well. The improvements in cash flow positions and country balance sheet in many of the large sovereigns, which contributed to a wave of credit rating upgrades in the third quarter, associated with the fact that emerging market crisis have become more predictable and fewer (given the greater amount of macro information), and that very few countries continue to have fixed or pegged exchange rates, contributed to a remarkable progress in emerging markets credit quality. For the first time in seven years all Latin American countries are expected to have positive economic growth, with the region as a whole expected to grow at 5% in 2004, and to keep growing in 2005. This growth is based on the recovery of domestic demand, the impetus given by the external sector, especially due to higher commodity prices fueled by global economic recovery and strong demand from China, and a favorable international context. As a reflex of this performance, credit rating agencies increased their sovereign debt ratings for several Latin American countries in the third quarter of 2004. The most important upgrades were those carried out for the long-term foreign currency sovereign debt of Brazil and Venezuela. The wave of upgrades in the region led to a revival in new debt issuance in the third quarter. Issuance was also buoyed by a compression in spreads, as funds flowed into riskier assets as a result of the low interest rates and abundant liquidity. Spreads reversed course in mid-May and by the end of the third quarter had retraced most of the earlier increase of the second quarter. Latin American spreads decreased by 109 basis points during the quarter, from 607 bps at the end of June, to 498 bps at the end of September, after having reached a peak of 626 bps at the end of May. The supportive financing conditions have allowed for the near completion of 2004 external bond financing requirements as well as substantial pre-funding for 2005. Latin American issuers are estimated to have completed about one third of their external bond issuance plans for 2005 through end-October.