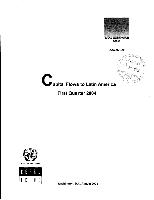 In the first quarter of 2004, bond flows remained strong as issuers rushed to take advantage of low borrowing costs. Emerging market issuance stood at US$24.4 billion, a 15% increase from the US$20.7 billion issued in the first quarter of 2003 and the highest quarterly supply in the last three years. Almost half of this years expected sovereign issuance materialized in the first three months. By region, Latin America had the most issuance this quarter with US$11.6 billion (47.3% of all emerging market debt issuance). However, in the near future, a tightening of liquidity by major industrialized countries is looming. Thus, the acceleration of net capital flows to emerging markets is beginning to slow as the prospect of higher short-term interest rates has made investors more cautious and triggered deleveraging across a wide range of markets. A rising of interest rates, especially as those foreshadowed by the United States, will negatively affect capital flows to emerging markets, particularly if they are enacted sooner and less gradually than anticipated. In order to counteract the latter scenario, emerging markets will have to rely on strengthening fiscal and monetary policies. The quality of policies in emerging markets, generally speaking, has improved in recent years to include flexible exchange rates (except in Venezuela and Ecuador), budget surpluses (the highest in Argentina, Brazil, and Venezuela), large international reserve buffers, and greater policy response. Yet, policy slippage remains an element of uncertainty. The momentum to implement further needed measures could be challenged, especially if the acceleration in growth currently forecast by the government and others fails to materialize. This is a plausible scenario: less investment leads to less growth.