The Netherlands Antilles: trade and integration with CARICOM (revisited) 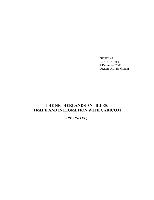 Introduction The study of trade and integration (LC/CAR/G.681) between the Netherlands Antilles and the Caribbean Community (CARICOM) was undertaken to assess the nature and extent of trade between the two groups of countries as well as the institutional framework for facilitating such trade. In addition, the study considered integration options for increasing trade, in particular Netherlands Antilles exports to CARICOM. Assessment of the export structures of the two groups revealed similarity in goods and services produced but a more diversified export structure in the case of CARICOM. The pattern of trade shows that the Netherlands Antilles exported more to CARICOM countries than they imported; however, most of the exports consisted of petroleum products whereas imports were more diverse. The inadequacy of the trade data collected for the study precluded a deeper analysis of the trade relationship between the two sets of countries, although information on existing barriers to trade pointed to the constraints on expanding the level of trade between the countries. The purpose of this paper is to expand the analysis of trade between the Netherlands Antilles and CARICOM using the Economic Commission for Latin America and the Caribbean (ECLAC) Competitive Analysis of Nations (CAN) methodology, which is based on United Nations data for the period 1985 to 2000 and to determine whether this sheds more light on the feasibility of specific integration options.

Recent developments in intra-CDCC trade
The Netherlands Antilles: trade and integration...
Economic and trade relations between Latin...
Latin America and the Caribbean in the World...