Latin America and the Caribbean: policies to improve linkages with the global economy 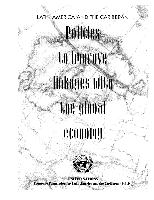 Latin America and the Caribbean: policies to improve linkages with the global economy

Foreword Four years ago, the secretariat submitted to the States members of ECLAC the document entitled Changing Production Patterns with Social Equity. It offered general guidelines for the development of the countries of Latin America and the Caribbean, including, in particular, the proposal that production should become more internationally competitive, not only in order to increase exports but also to achieve efficient import substitution. At the same time, the document offered a framework for subsequent activities of the Commission revolving around the study of a number of related topics.* The economic panorama of the region has indeed changed considerably in these four years. Although with certain differences among countries, the macroeconomic disequilibria of the past decade have begun to be corrected; the transfer of resources out of the region has turned around to become a huge net inflow of foreign capital; the export sector has grown and diversified; and economic activity as a whole has shown a modest recovery. The Latin American and Caribbean countries are now feeling the need to build on these advances, some of which are still rudimentary and partial, surmount the difficulty of making headway in highly competitive international markets and overcome the considerable social lags that have accumulated. Their chance of carrying out all these tasks will ultimately depend on establishing better linkages with the global economy. One of the many conclusions reached in this document is that, notwithstanding the multiple obstacles that impede development in the region, a constellation of potentially favourable factors is also present today which could give this development a strong boost. These include the gradual assimilation of the lessons learned in the process of increasing and diversifying exports; improvement of the quality of macroeconomic management; the chance to fill a gap in public policy instruments in the region –i.e., the implementation of micro- and meso-economic policies– in order to increase productivity in accordance with the best international practices; renewed access to external financing; and a boom in intraregional economic cooperation. Another factor has been the recent adoption of new international trade rules under the Uruguay Round. These rules, although far from meeting all the region's demands, at least represent a step forward in support of multilateralism. Whether improvements can be made in the participation of Latin America and the Caribbean in dynamic trade flows and in the region's access to technology, foreign direct investment and financing depends in part on exogenous factors which are beyond the control of the countries of the region. However, much remains to be done in terms of both national policies and intraregional cooperation ** to enhance linkages with the global economy. The main purpose of this document is to explore the scope of efforts being made to achieve these objectives. It discusses three interrelated types of policies, namely, trade policy, micro- and meso-economic policy in support of production systems, and macroeconomic policy, with specific emphasis on financial flows. The last one is especially relevant in the current economic environment, in which capital inflows are having a crucial effect on two key variables in the behaviour of exports –interest rates and, in particular, exchange rates. The document is divided into three parts, one for each type of policy. The first chapter of the summary section not only provides an overview of the contents of these three parts, but also combines their various components into an integrated, coherent presentation in the framework of the systemic proposal that has been put forward by the secretariat. It should be noted that this document, like those preceding it, does not claim to offer universal recipes, in view of the enormous diversity of situations in the region. Rather, it seeks to promote a debate on areas of key interest to the various countries in their efforts to improve their linkages with the global economy, as part of the agenda of changing production patterns with social equity.