Latin America and the Caribbean in the World Economy 2009-2010: A crisis generated in the centre and a recovery driven by the emerging economies 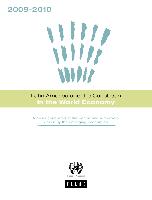 Latin America and the Caribbean in the World Economy 2009-2010: A crisis generated in the centre and a recovery driven by the emerging economies

The 2009-2010 edition of Latin America and the Caribbean in the World Economy, which discusses the crisis generated in the developed world and the recovery driven by the emerging economies, is divided into five chapters. Chapter I undertakes a short- and medium-term analysis of the post-crisis international economic situation, concentrating on its implications for international trade prospects in Latin America and the Caribbean. It examines the recovery of the global economy, which has centred mainly on the Asian economies (especially China) and other emerging economies, together with the role played by international trade in this recovery both globally and regionally and the heterogeneity of trade performance between different regions of the world. Chapter II reviews developments in regional trade during and after the crisis from both a longterm and a more immediate perspective, as well as the trade policy applied by the region's countries during this period. It offers a detailed analysis of the evolution of goods trade flows by origin and destination and of their sectoral composition over the past two decades, finding a high degree of heterogeneity between the region's countries: export growth has been stronger in the countries of South America than in Mexico, Central America and the Caribbean, owing to strong demand for commodities from Asia, particularly China. Consequently, while the recovery in regional trade has been substantial, particularly in South America, it has heightened an already somewhat excessive reliance on commodities that incorporate little know-how or technological progress. Chapter III reviews recent trade developments
(particularly in the last 12 months) within the main
subregional Latin American integration schemes: the
Southern Common Market (MERCOSUR), the Andean
Community and the Central American Common Market
(CACM). It also examines progress with more recent
initiatives such as the Latin American Pacific Basin
Initiative and the Community of Latin American and
Caribbean States. Also looked at are the most prominent
recent initiatives to enhance trade ties between countries
in the region belonging to different integration schemes. Chapter IV analyses recent trends and future prospects
in the Caribbean Community (CARICOM), an incomplete
customs union of 15 States in the Caribbean that includes
most English-speaking countries in the region plus
Suriname and Haiti. Chapter V examines the strategies recently adopted
by Japan to enhance its economic relationship with Latin
America and the Caribbean from the perspective of a
public-private partnership that aims to take advantage of
opportunities in the region not only in the area of natural
and energy resources but also in respect of food security and
infrastructure..