Foreign Investment in Latin America and the Caribbean 1998 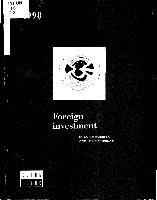 Foreign Investment in Latin America and the Caribbean 1998

This study approaches foreign direct investment (FDI) in Latin America and the Caribbean from a new perspective by analysing the strategies of transitional corporations in an attempt to overcome the limitations of official FDI statistics (whether from destination countries or the main investor countries). This is achieved through a study of the information obtained from research programmes of the Unit on Investment and Corporate Strategies and from information obtained from secondary sources, mainly from specialized financial journals. This approach affords a better understanding of the nature of the phenomenon, set against the background of international market trends, national policies (of both source and destination countries) and new corporate strategies. For the eighth consecutive year, FDI flows into the region have increased sharply and have had a very strong impact on the economic performance of countries. In 1997, US$ 65.2 billion poured into the economies of Latin America and the Caribbean. Approximately 30% of that was concentrated in Brazil, which emerged once again as the principal FDI destination country in the region. According to preliminary estimates for 1998, net FDI inflows will be much the same as in 1997. This document presents a comprehensive analysis of FDI patterns in terms of amounts, form, geographical and sectoral destination and main agents. It also includes a detailed study of FDI characteristics in the six main destination countries (other than Brazil) and of the emergence of intraregional investment. As the target for the highest levels of inflows in recent times, Brazil is the subject of a chapter in its own right; another chapter is devoted to the investor country that is the source of the largest stock of FDI in the region, namely, the United States; and a third deals with the sector in which the most important foreign firms in terms of sales are to be found: the automotive industry. This document has thus succeeded in overcoming statistical deficiencies and providing deeper insight into the phenomenon.