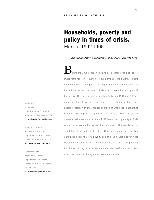 Before the 1995 crisis, Mexico had registered over a decade of
improvements in human development indicators. Using decomposition techniques, this paper measures the benefits of those improvements in terms of allowing households to cope with that crisis. The decline in consumption between 1994 and 1996 is amply explained by the reduction in the returns to household characteristics, with the changes in those characteristics serving to reduce the negative impact of the crisis. Had household characteristics remained at their 1992 levels, rural poverty in 1996 would have been 48% higher than observed. The results of our simulation show that had the PROGRESA programme been in place during the crisis, the rural poverty gap and the squared poverty gap would have been reduced. The conclusion is that social programmes that focus on long term development can also perform an important safety net function during a macroeconomic crisis.

The impact of gender discrimination on poverty in...
Female-headed single-parent households and...
Defeating poverty through social inclusion
CEPAL Review no.94