Home » Events » ECLAC participated in the World Water Week 2021, organized by the Stockholm International Water Institute, through its Water and Energy Unit
Available in: EnglishEspañol

ECLAC participated in the World Water Week 2021, organized by the Stockholm International Water Institute, through its Water and Energy Unit

The World Water Week, organized by the Stockholm International Water Institute, started last August 23. This event has more than 30 years of history and it constitutes the most influential conference on water worldwide. It was attended by more than 16,000 participants from 170 countries in its more than 400 conferences. In this context, Dr. Silvia Saravia-Matus moderated together with Ms. Michela Miletto, Coordinator of UNESCO's World Water Resources Assessment Program (WWAP), the session entitled “Accelerating gender equality in the water domain” where several Latin American and Caribbean countries participated.

The session started with the intervention of Mr. Abou Amani, Director of UNESCO's Division of Water Sciences, who evidenced with data the impact of the lack of development in the domain of ​​water and gender. He highlighted the need for a global commitment to establish a principle of equality in access to water. After his intervention, it was shown a video produced by UNESCO's World Water Resources Assessment Program (WWAP) "The value of Equity in Water and Gender", where the value of water was represented in gender equality, which emphasized the gap in hours lost by women collecting for water and how this influences their education and self-improvement.

Afterward, his Excellency Mr. Borut Pahor, President of Slovenia, highlighted the role of women in collecting water to the detriment of their education. Her Excellency Mrs. Elizabeth Gómez Alcorta, Minister of Women, Gender and Diversity of Argentina highlighted the creation of this Ministry in 2019, which seeks to design and implement national equality policies and is committed to mainstreaming the gender approach in all policies including environmental and water. Her excellence Ms. Teresa Ribera Rodríguez, Minister for the Ecological Transition and the Demographic Challenge of Spain, highlighted the existing under-representation of women in decision-making processes in the water sector. She emphasized that Spain is committed to facilitating reforms and investments to close the gender gap, in both the private and public sectors. Later, her Excellency Ms. Kitty van der Heijden, Director of International Cooperation and Deputy Minister for Foreign Affairs of the Netherlands, commented on the urgency in data collection and analysis to address gender differences and the need for equal representation and equal opportunities for the participation of women in the design of policies. She also stressed that women should be the key drivers on the gender and climate change agendas and should increase their authority on the matter. Finally, her Excellency Ms. Haydée Rodríguez Romero, Vice-Minister for Water and Ocean of Costa Rica, stated the relevance of the 2009 National Water Policy of Costa Rica, which considers gender as a transversal axis that guides policy, government strategies, and actions. In addition, she highlighted the commitment of state water supply companies, such as the Costa Rican Institute of Aqueducts and Sewers, which are promoting the strengthening of women's leadership and encouraging their participation in decision-making spaces through their Gender Equality Policy. (2018 -2030). Mrs. Silvia Chávez Cereceda, Director of International Cooperation of CONAGUA Mexico, regretted that the gender and water objectives established to date had not been met as planned. However, CONAGUA is currently working on its water policy to close inequality gaps, considering especially goals related to indigenous women living in marginal areas. For this purpose, there are federal economic incentives for projects that increase the participation of women in decision-making positions.

To conclude, Ms. Michela Milletto from UNESCO called for reflection to transform all proposals into actions, since there are still current gender equality challenges and urgent and coordinated actions are necessary to accelerate progress towards equality and sustainable development in compliance with the 2030 Agenda.

This call for action seeks to create a multistakeholder coalition in order to highlight the need to accelerate gender equality and women empowerment in water, call upon relevant stakeholders, encourage the development and implementation of gender-inclusive strategies and, accelerate action towards a gender transformative water domain. For this, the call for action is made up of 2 pillars, i) recommendations for action and ii) communication and dissemination. For further details you can access the following official document, which has the contributions of ECLAC: “Taking stock of progress towards gender equality in the water domain: where do we stand 25 years after the Beijing Declaration?”.

A fact-based Call for Action: Accelerating Gender Equality in the Water Domain

•    Spain: Teresa Ribera Rodríguez, Minister for the Ecological Transition and the Demographic Challenge

Closing Remarks: The way forward –  Engage in the Call for Action 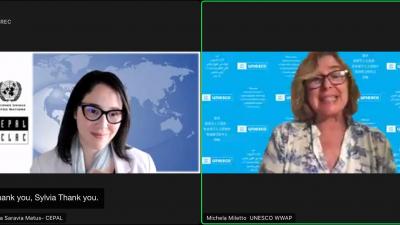