Building equity from the beginning: the children and adolescents of Ibero-America 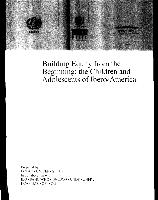 Building equity from the beginning: the children and adolescents of Ibero-America

Foreword The Ibero-American Summit of Heads of State and Government,which met in Panama in November 2000, devoted a good part of its deliberations to the subject o children and youth.It recognized the importance of their rights,as clearly enshrined in the Convention on the Rights of the Child,which all the Ibero-American countries have signed.It also identified the most urgent problems acing boys,girls and adolescents and,in the Panama Declaration 2000,set forth the strategies for resolving them. As these priorities were established,it became clear that there was a need for a thorough,detailed evaluation of the living conditions of Ibero-American boys,girls and adolescents at the close of the twentieth century. Accordingly,the heads of State and government concluded that it was essential for a study to be produced to supply such an evaluation,complement the strategies they had decided on and,perhaps most importantly,set specific targets to provide a basis for solid progress towards the much looked-for implementation of the Rights of the Child. In response to this call from the Tenth Ibero-American Summit of Heads of State and Government,the Economic Commission for Latin America and the Caribbean (ECLAC),in collaboration with the United Nations Children s Fund (UNICEF)and the Secretariat for Iberoamerican Cooperation (SECIB),prepared the study Building Equity from the Beginning:the Children and Adolescents of Ibero-America .Generous and substantial assistance was provided by a number of international organizations,which are referred to in this work. The study reveals a mixed picture.On the one hand, the last decade of the twentieth century saw substantial progress in overcoming some of the problems that have traditionally affected children and youth in Ibero-America. The greatest achievements were in the field of social rights,i.e.,health,nutrition and education,largely as a result of the stimulus provided by the 1990 World Summit for Children and the 27 specific goals it laid down. Unfortunately,despite these achievements,there are still pronounced inequalities among countries and among social groups within them.Furthermore,the environment generated by current development models seems to be shaping twenty-first century economic and social events in a way that is limiting the scope for further progress in the short term and perhaps in the medium and long terms as well,preventing the social investment carried out in recent years from yielding the return expected,and heightening the tendency towards inequity among and within countries.If this is to be avoided,it is vital that higher priority be given to enforcing the rights of boys, girls and adolescents and that greater resources be put into social investment that a ects them,with a view to achieving substantial improvements in their living conditions and ensuring equality of opportunities. It is clear,then,that the progress achieved can be consolidated only if renewed,persistent e orts are made. If this does not happen,not only will the basic living conditions with which economic rights are concerned improve more slowly,but the civil,political and cultural rights of boys,girls and adolescents in Ibero-America will increasingly be flouted. The study Building Equity rom the Beginning:the Children and Adolescents of Ibero-America has thus been produced in response to the request made by the Tenth Ibero-American Summit of Heads of State and Government,headed by the President of Panama,Mireya Moscoso,and its purpose is to underpin the strategies set forth in the Panama Declaration.It is now essential for these strategies to be implemented in the different countries so that genuine respect can be secured for the rights of boys,girls and adolescents in Ibero-America. They are our future.