45 years of the Regional Gender Agenda 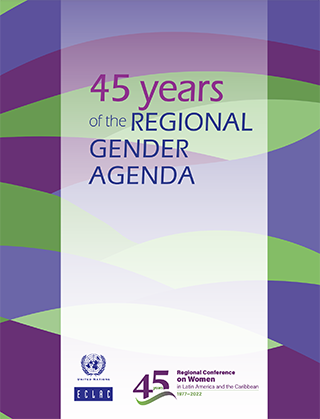 45 years of the Regional Gender Agenda

Forty-five years ago, the first Regional Conference on the Integration of Women into the Economic and Social Development of Latin America was held (Havana, 1977), as an intergovernmental platform for the region following the World Conference of the International Women’s Year (Mexico City, 1975). This meeting culminated in the adoption by the governments of the region of the Regional Plan of Action for the Integration of Women into Latin American Economic and Social Development, the region’s first road map for active inclusion of women in economic, political, social and cultural life, and increased awareness of the obstacles they faced in improving their circumstances, given multiple inequalities. The governments of the region thus gave the Economic Commission for Latin America and the Caribbean (ECLAC) a mandate to convene periodically, at intervals of no more than three years, a Regional Conference on Women.

This report is a contribution to implementation of the commitments assumed. It compiles the agreements adopted by governments at the sessions of the Regional Conference on Women in Latin America and the Caribbean, and is a tool for consultation, but above all for action and construction of a future based on the collective memory of the women of Latin America and the Caribbean and of the care society; a future of sustainable development with equality and sustainability of life as principles to drive the change of era sought by the region.

Regional Conference on Women in Latin America and the Caribbean